The Measure of a Man by Stéphane Brizé - Review 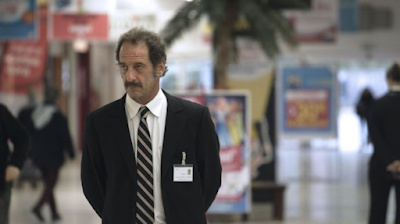 Very few films in the last 10 years of social realist cinema have managed to achieve what Stéphane Brizé has in The Measure Of A Man (La Loi Du Marché). The film made its premiere at the Cannes Film Festival last year, and its lead Vincent Lindon won a Best Actor award. It was also shown at last year’s London Film Festival, and was an early favourite with critics and festival-goers alike. It tells the story of a put-upon former factory worker Thierry (Vincent Lindon), who after giving the best years of his life to a job he excelled at is made redundant and forced to go through the bureaucratic rigmarole of job seeking, retraining, and having to justify his unemployment benefit cheque every month. At first Thierry seems to be taking everything that is thrown at him in his stride, actively looking for work in his area of his expertise, but we soon see him becoming more and more exasperated by the unfairness of what has happened to him.


The film takes a political turn when Thierry finds himself struggling to get back on his feet. Brizé uses long, unbroken takes to depict Thierry’s ordeal, the frustration and sometimes pure anger at the people who he feels are taking him for granted. At times Thierry feels belittled and doesn’t know how to deal with those sending him on a wild goose chase in order to tick some boxes. In one instance Brizé uses a long sequence showing Thierry trying his best not to let his spirit be crushed by bureaucrats and bullies in a job club sessions and pointless interview exercises in which his fellow job seekers are encouraged to give their honest opinions on how well he did. Later we see him struggling with changes in his industry - for instance giving a job interview over Skype. He is hopeful he may get the job, but is crushed when he realises that he was never really in the running in the first place.

The subject matter of Brize’s film may not sound new to people; it might remind some of the Dardennes’ Two Days One Night, which deals with the subject of laid-off factory workers, or even this year's winner of the Palme D’or in Cannes, I, Daniel Blake by Ken Loach I, which deals with the treatment of benefit claimants in the UK under a Conservative government. However Lindon’s performance sets this film aside from the rest - his formidable presence as the everyman who finds himself in exceptional circumstances carries the film, especially during some of the more harrowing scenes. This is apparent when he takes a new job as a security guard in a supermarket, where he is made to humiliate a colleague who is caught with her hands in the till. Things take a turn for the tragic soon after; Thierry is forced to make a decision which can see him lose everything he has worked hard for.

This isn’t Lindon’s first outing in a Stephane Brizé production, having played main parts in Mademoiselle Chambron and A Few Hours Of Spring. It’s easy to see that this collaboration has proved to be fruitful for both. Lindon is believable and simply brilliant at portraying a genuinely likeable character who will have you rooting for him till the very end.

The Measure of a Man is out on general release on June 3rd.