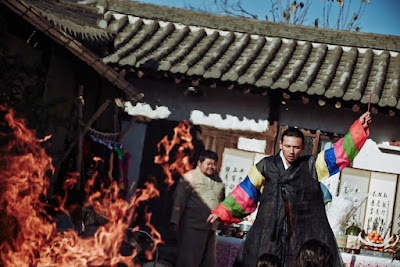 Genre cinema is a rare presence in the official selection in Cannes, especially horror films, except for the Midnight Screenings, and even the titles selected for those over the last few years have been rather lacklustre. There have been the odd exceptions in the 90's (the most notable being the inclusion in competition of Abel Ferrara's Body Snatchers (1993). So the inclusion of The Wailing this year, in the official selection (but outside competition, unfortunately) is a pleasant surprise, the film being a proper horror film, bloody, terrifying, and disturbing. It also shows, alongside The Handmaiden (also in the official selection), that South Korean cinema is making a great comeback in the international scene after a few years with few memorable titles.


In The Wailing,  a police officer investigates some unexplained murders in a small town just as a disease seems to be spreading among the inhabitants, driving some of them insane, with the recent arrival of a Japanese stranger causing suspicions.

Director Na Hong-jin made a name for himself with The Yellow Sea (2010) and the frankly insane The Chaser (2008) but The Wailing truly is his crowning glory. His visual and directing talents are in evidence from the start, with him never chasing a "pretty" image yet delivering memorable shots one after another. Set in an earthy, often rainy setting spliced with dream-like elements and filmed with a wide aspect ratio (I'd guess 2.35 :1), the film looks fantastic and puts most of the rest of the selection to shame when its come to aesthetics

The audience is lulled in a false sense of security during the first act, with bumbling police officer Jong-Goo (Do-won Kwak) channeling a comedic energy not dissimilar to those police inspectors in Ma Loute (also in the official selection this year). This serves as a sort of venus flytrap for the rest of the film, as the mystery deepens, supernatural elements emerge, and worst of all, his young daughter gets caught up in the events. 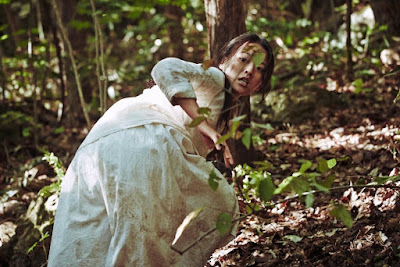 The script is masterful, giving us just enough clues not to be too frustrated but remaining mysterious, and throwing in a whodunnit element that keeps us guessing right until the end, and the laughers from the first few scenes give way to some truly frightening scene. Lame scenes of exorcism have often polluted genre cinemas but The Wailing features one of the most disturbing and intense one, that leaves you feeling as if you have just been exorcised yourself. No cheap CGI and rubbish creature here, instead the film relies on old-school, practical and stylised make-up effects, with one of the scariest and most memorable demons cinema has offered in a long time. Perhaps even scarier is the sense of the unexpected weaved in, the twist and turns of the story never feeling artificial. The Wailing is anything but predictable, and we are hit by the same doubts and sense of helplessness as Jong-Goo as the evil slowly spreads its grip on the town.

Just as insidious is the way the director toys with our feelings, making us at once root for a seemingly innocent stranger being victimised by the locals only to make us wonder whether there is not more to him and keeping us guessing. As for the gore, it never feels gratuitous, and its spare but brutal use makes it all the more effective.

A gripping, often arcane, at times hallucinatory and wonderfully ambiguous through a 2h30 running time that flies by, The Wailing is an experience like no others and a true horror masterpiece.