Why I'm Angry About Side Effects' Ending - SPOILERS

SPOILERS SPOILERS SPOILERS. Obviously do not read this post if you have not seen Side Effects yet. And do not get tempted, it does not have one of those Six Sense WTF twist endings, but a gradual and complex narrative build up, so you have nothing to gain by reading this, it will just make little sense. It is frustrating sometimes not to be able to discuss film plots for fear of ruining the film's enjoyment, but films are also made to be discussed long after you have seen them. So let the rant begin...


I still think Side Effects is a brilliant film. Gripping and quietly oppressive, like being smothered by a pillow. Clinically filmed in a world of glossy practices and expensive lofts, it feels like a grown-up thriller, which relies on a tight script more than cheap shocks. And it benefits from some brilliant performances from both Rooney Mara and Catherine Zeta-Jones.

So what is wrong with the ending? I basically feel the two ladies should have got away with it. There is a difference between how you would want a film to end (and yes my sympathies clearly lied with them), and how you feel an ending does not fit with what have occurred prior to it, and this is the latter in this case.

The film takes great pain to present some complex situations and ambivalent characters, yet it goes for a happy happy ending, which simply does not fit the story's moral compass. So yes, Emily (Rooney Mara) and Victoria (Catherine Zeta-Jones) came up with a pretty evil plan which involved killing a man, ensnaring another man and ruining his life, and get rich in the process. 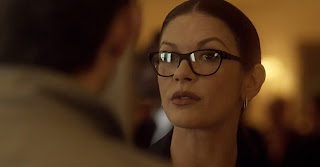 Yes this is unforgivable. Yet, were they not somehow victims themselves of the male world? Emily's husband, Martin (Channing Tatum), betrayed her trust, and pretty much used her as a trophy wife, when she clearly had some previous mental problems already. She had to put up with four years of being strong, alone, while he was in jail, sustaining herself then having to look after him when he got released. As for Victoria, she got dumped for a younger model, perhaps not the most defensible excuse for killing a man. But still.

And as for Jude Law himself,  he is an ambitious man who thinks nothing of being paid for a big pharmaceutical company to push some new drugs (a lovely practice by the way, what kind of world do we live in!), all that so that he can fund his upwardly mobile lifestyle. So why does he all of the sudden become a model of virtue and the hero of our story? Yes his life is ruined, but does that justify the vicious streak he displays on the last act? I will not even bother looking too closely at the absurd legal implications of his acts, but he almost seems to take a sadistic pleasure in tormenting Emily, with threats of medical mental castration and electric shock therapy. Not to mention his visible enjoyment of the control he exerts over her.

As the story unfolded, to me, Rooney Mara came across as a femme fatale meets sleeping beauty, in lesbian cahoot with the evil stepmother figure (Victoria), a rather brilliant and surreal deviation from a plot very much grounded in contemporary reality so far, and I was enjoying this development tremendously. Which is why I expected a very different direction for the ending. It played an interesting card with its hint of triple crossing and more twists to come, and it could have gone the Wild Things way of the Russian Dolls twists, where each one uncovers yet another twist.

All we end up with is a very moralistic ending where the lesbian psychos get punished, and harshly so, and the dominant and morally ambiguous male character, for all his multiple failing and unpalatable behaviour, get his life back, his wife, his loft, and the private education for the kid. The film deserved a morally ambiguous ending, and I truly hope that Emily's last scene hints that it is not the end quite yet.
at 22:42