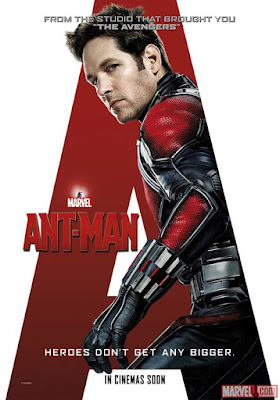 Marvel has never been afraid of taking risks, but Ant-Man is the one film that feels like their biggest gamble in a while. This is the first time since Captain America in 2011 that the studio introduces a new character single-handedly carrying a whole film on his shoulders, and one that is not well known from the public at all. And while Marvel has always given the image that they care about their fans, there has been the small matter of original director Edgar Wright walking out of the project due to "creative differences" after years of working on it, which did not go down well at all on the blogosphere.

In Ant-Man, Scott Lang (Paul Rudd), a small-time burglar, unwittingly finds himself the recipient of a suit that allows him to shrink to the size of an ant while seeing his physical force increased tenfold, making him the perfect weapon. Enrolled by the creator of this technology Hank Pym (Michael Douglas), he must pulls the perfect heist to ensure this invention does not fall into the hand of megalomaniac Darren Cross (Corey Stoll). 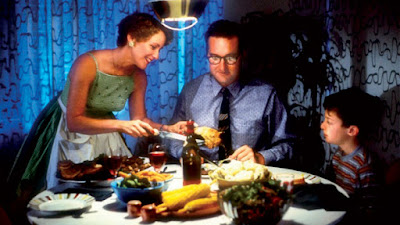 The black-and-white still of a boy's face. Carefree kids playing with a skipping rope on the sidewalk of a utopian suburbia (to the brash, brassy tune of a Perez Prado mambo). A pink-lettered title appearing across the fender of a pristine, pale blue Oldsmobile. Bob Balaban's feature debut Parents (1989) opens with a montage devoted to pure nostalgia. The boy's monochrome image suggests a bygone childhood, the make of car conjures days of old(s), and even the title looks back to the previous generation.

The 1950s were a time of (relative) comfort and innocence, coming after the turmoil of the Second World War but before the social upheavals of the Sixties. It is the decade regarded as most emblematic of American growth and prosperity, of heavily codified conservatism and family values - a sit-com cosmos where Dad goes out to win the bread, Mom stays home to make it, and Junior grows up to be just like daddy. Which is also to say that its iconography comes with a great deal of retrospective camp attached, and is ripe for parody and deconstruction - something which David Lynch showed all too well in the faux-Fifties world of his Blue Velvet (1986) and Twin Peaks (1990-1). Disembowel the 1950s, and you are challenging the American dream itself - or at least the version of it wherein white middle-class domesticity, conformity and patriarchy rule the roost. 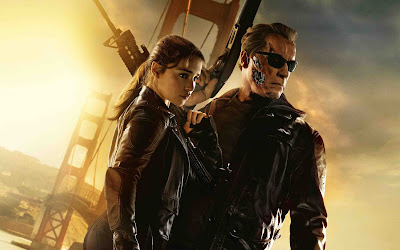 Terminator Genisys is the Indiana Jones and the Kingdom of the Crystal Skull of the series. Alan Taylor’s summer blockbuster might not have Arnie hiding from judgement day nuclear blasts in a lead-lined fridge, nor is the film plagued by annoyingly cutesy CG prairie dogs and monkeys, but it does have a weary screen icon looking a bit long in the tooth for all this high-octane drama. The question of age and ageing is, like Indy’s maligned fourth outing, made into a subtheme. Schwarzenegger’s monotone reply to the thorny subject – which becomes a comic retort – is: ‘Old but not obsolete.’

Series creator James Cameron might have jumped aboard the promotional bandwagon as head cheerleader for the new film, but it’s abundantly clear from Taylor’s uninspired and occasionally downright goofy direction, that Big Jim should have signed up to get this franchise back on track. The Terminator franchise is in desperate need of a hero to save it from the doldrums.