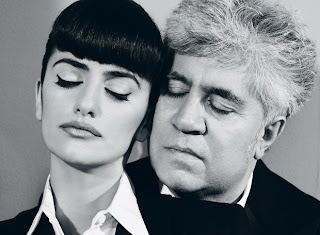 Ah, Pedro Almodóvar! The man, whose films were responsible for some of my earliest teenage thrills (cinematographic and others), is having one of the most consistently brilliant yet endlessly evolving and interesting career. And I have just seen his latest, I'm So Excited (review live this week-end), which I have to admit (SPOILER) I enjoyed a whole lot more than I had anticipated. So having just decided to upgrade him to being my joint-favourite director (alongside David Lynch), I am going to embark on a project to celebrate the man.


I do find that, despite his critical and commercial acclaim (and his Oscar glory even), he is not always appreciated enough or even taken seriously in some circles. Now there is nothing wrong with not being able to connect with a director, not matter how talented, being a film critic is a subtle blend of personal connection and more rational judgement. Take Paul Thomas Anderson for example. His films have bored me to tears one after the other, I am not afraid to admit it. Well, I am afraid, a little bit, those PTA fanboys are rather terrifying.

But Pedro Almodóvar is not just about the garish colors, the provocation and the hot-blooded Spaniards who populate his films. Not that he does not that very well, he does. But there is so much more to him. Early on, there has always been a warm humanity shining through all of his work, and especially, a love for his characters, in all their flaws and complexities, even when not always so likeable. And what fantastic characters he writes, often tragic, utterly believable even when eccentric, and terribly human.

Yes I am a bit biased, being a major fan of all things Spanish, but I love the passion, the intensity of his stories, the songs, the melancholy, the unbridled fun, not to mention his fantastic sense of style. And it is no accident that the most beautiful and talented actresses (and actors too!) have worked for him, as he has offered each of them the gift of some wonderful parts. (Penélope Cruz singing in Volver, quite simply an Earth-shattering moment in the history of cinema)

On a more personal note, I have an anecdote about him, not the most interesting one but still, as I got lucky enough to meet him in person. Well, "meet" him is overstating it a little bit. At the tender age of 16, as I was attending the Cannes Film Festival for the first time in 1992, I bumped into him alongside La Croisette, as he and Jamie Lee Curtis (both members of the jury that year) were strolling along. He was instantly recognisable, with his huge spiky dark hair, hidden behind some huge sunglasses. So I plucked the courage to go up to him and asked for his autograph, a request he politely complied to. I didn't speak Spanish, so "An autograph please, thank you" and "don't forget your pen" is all that was exchanged. Ah well!


Pedro Almodóvar has the soul of a humanist, the style of an esthete, and the wicked sense of fun of a Spaniard. So what with my project? Well I am not writing a book about him. But I have decided to rewatch every single one of his films in chronological order in the upcoming weeks. And then, upon my return from the Cannes Film Fest, during those not particularly interesting summer months with barely a few forgettable blockbusters to keep us busy, I shall publish a review of each of them. Being mindful of my time constraints, it will be under the format of three capsule reviews per post, published weekly. So watch this space, go and see I'm So Excited, watch every single one of his films or wait for me to entice you to do so, and join me from early to mid June for the Viva Pedro project! In the meantime, to start the celebration, enjoy this hilarious video of a cinema master having fun in his vinyl mini-skirt. No, I don't mean Belá Tarr.