The Dead: Zombie Apocalypse In Africa 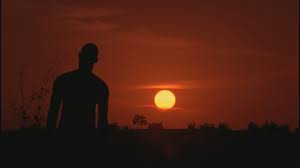 Plot: As a zombie plague is spreading across West Africa, Sgt Daniel Dembele (Prince David Oseia), on a search for his lost son, finds himself teaming up with Lt Brian Murphy (Rob Freeman) who is simply trying to survive and escape.

Unlike what used to happen in the 70's and early 80's where it was still possible to make some horror classics with the backing of big studios (The Shining, The Thing etc...), indie cinema is where it is all at for horror films at the moment. I am so sick and tired of the same overused tricks (spinning heads, whispers, followed by silence followed by a loud bang, frenetic CGI ghostly effects), the sort of artifices than those on a smaller budget just cannot afford. So indie horror has to be more creative, and recently has given us such new classics as May, The Woman, The Innkeepers...


In The Dead, directors Jonathan & Howard J. Ford offer both a tribute to and a fresh new take on the zombie sub-genre. It is not revolutionised here, using the well known codes of the classics: anybody bitten by a zombie turn into one of them, they can be killed by a shot to the head (or a brutal decapitation!), and more importantly, they walk slowly (a bone of contention in newer films for many fans). I have actually often wondered how hard it can get to avoid zombies when they are slow moving, and the film addresses this issue particularly well. Several scenes see the protagonists face the undead without much worry, when out in the open and low in numbers.  But it is another story when scores of them are swarming around, or when they find themselves in an enclosed space. Besides, zombies here have the nasty habit of slowly creeping up from the background, with the directors using the z-axis not for shock value, but to add to the sense of constant underlying threat. 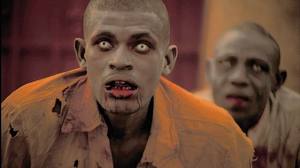 But the film also adds some freshness (so to speak) to an otherwise unremarkable premise because of its location. And in some ways the film reminds me of District 9 as a result. Not that their subjects have anything in common. But in the way they both transpose a not particularly original basic plot to an unusual setting (Jo'Burg and here Western Africa) and enhance it as a result, making each film appear grittier and more realistic than had it happen in a more familiar place. And both bring in a social element to the story, just in the way that horror classics did (especially the Romero's living dead trilogy).

Here that social aspect is not rammed down our throat. While the specifics of the zombie plague are unclear, it is presented just in the same way as a virus outbreak or a famine, spinning out of control, and with having all the aide workers and everybody fleeing the country. If you really like metaphors, I suppose you could see it as one, and the way Africa is being abandoned by wealthier continents.

Speaking of location, while the directors never allow themselves to turn their film into a travelogue, there is no denying the beauty of the environment the story is set in. But the film never plays the card of cheap exoticism. Nature here is neither overtly dangerous, nor welcoming, just vaguely hostile in its indifference.

The directors have gone for a li-fi approach, with a threadbare script, which works within their realistic frame. There are no contrived plot developments (except for one!), just a story nearly entirely based on the need to survival. It is the film's strength but also ts limitation somehow. The intentions are admirable, and the realisation commendable. Despite what must have been a pretty limited budget, The Dead never feels amateurish, with some very effective and well designed gore, and a polished visual finish. And the film opens with a pretty gruelling scene on board of a plane about to crash, which sets the tone for the rest: tense and unforgiving.

Yet, it perhaps lacks that spark of genius that would truly make it a classic. It is satisfying, respectful of its audience and the genre it is tackling, but does not actually leave much lasting memory. Their is a lack of emotional connections with the two protagonists, although you have to be grateful that the script does not try to artificially cook up some buddy movie stereotypes, and it mercifully avoids sentimentality. Still, fans of the genre will enjoy this new spin, any attempt to inject some originality in this oversubscribed sub-genre should be applauded.