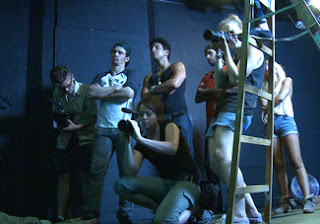 The London Lesbian & Gay Film festival is finding itself in excellent health, after a scare that it might be scrapped altogether a couple of years ago, when Tories budget cuts to the culture meant nothing was safe. Yes its duration has been reduced from a fortnight to ten days, but I believe it benefits it, as there was not always enough decent material to keep it going for so long. And indeed attendance records are being broken again after last year. So what delights did the festival bring us this year?


First up was South Korean White Night. Now I do not need to go over my love for South Korean cinema again, however I had never seen any LGB films from this country, so there was my chance. Sadly this turned out to be a big let down.

In White Night, we meet Won Gyu (Won Tae-Hee), a jaded cabin crew, back to Seoul after a prolonged absence, and looking for a hook-up for the night through a dating app after an encounter with his ex turned sour. Meeting younger Tae-Jun (Yi Yi-Kyung), the date could not turn any worse (and it is almost worth watching this film for this alone, because no matter what, none of your dates will ever have been so disastrous in comparison). Total lack of chemistry and a pitiful attempt to engage in intercourse (I use this clinical term on purpose, considering how little warmth and passion comes into play) follow. Yet they still end up spending the night together, and we soon realise there was a secret agenda behind Won Gyu's return to Seoul.

The main problem I had with this is the total lack of likeability from both lead characters. Sure we understand later on the reason behind Won Gyu's cynicism. But his companion for the night does not fare any better. In fact, both deserve a top ranking in the "douches of Grindr" website and it is hard to care about anything that ensues on that fateful night when there is so little emotional involvement.

To make things worse, director Leesong Hee-Il manages to make his nighttime odyssey in the big city look incredibly dull. And, as anybody who has ever visited any big Asian city will testify, making them look boring at night demands a mighty effort, as they are so effortlessly evocative. Hell I shot some short video clips of Tokyo at night which had more vision and flair than what is displayed here. You just have to think about what Wong Kar Wai could have done with the story and weep.


Next on was Interior. Leather Bar, which had been one of my most anticipated films of the year. What starting off as a straight (so to speak) remake of Cruising, turned into something else altogether due to copyright issues. Co-directed by James Franco and Travis Mathews, this purposed to recreate the infamous missing scenes from the William Friedkin's masterpiece, edited out under the MPAA's pressure because of their raunchy content, and lost forever.

And because fourty minutes of club scenes were not going to make a film, Interior. Leather bar turned into something else entirely. It purposes to challenge a mainstream audience with the depiction of non simulated gay sex, probably one of the last taboos in cinema.

But I have to admit this was a letdown too. While I like the concept a lot, I found the execution to be really vague, and rather repetitive at times. It is almost as if all the participants spend a lot more time talking about the film they had in mind rather than actually making it. This can be seen as an avant-garde way of making a film (and indeed this was meant to be shown as an art installation at first) but is still remains rather unsatisfying and unfocused. Interestingly, the actor who takes over from Al Pacino finds himself in a very similar scenario, as a straight actor immersed in an environment he knew nothing about. There is a priceless shot of him in utter shock as he is witnessing some real gay sex taking place right in front of him. And it is rather amusing that himself admits on camera that he does not quite understand what the whole project is all about.

The few short recreations of the club scenes are rather brilliant. With a low budget and set in a warehouse in Los Angeles, there is not attempt to do a faithful recreation of the New York leather bars, but the spirit of Crusing is very present, and they are very evocative. There is a sex scene between two men later on that is as sexy as it is full of tenderness, and which proves yet again that director Travis Mathews has a real eye to capture intimacy, as already shown in his serie of films In My Room. But then you just have to wonder where exactly this scene was supposed to feature in Cruising, as it does not tally with any of the narrative thread. One of the most captivating aspects of this film is the involvement of James Franco as a co-director, but this aspect is not fully explored.

Interestingly, the sudden interest in Cruising is no coincidence. The while imagery of the New York/ San Francisco gay scenes of the early 80's, long seen as the epitome of naff, first came back as an ironic hipster trend recently, only to become more widespread and not so ironic any longer, and it is rather refreshing. And we were lucky to have a short Q&A with Master Lavery, a participant from the film and a real life BDSM master. He was as eloquent as he was attractive, and my usual shyness (when sober) prevented me from going to talk to him as I saw him at the BFI after the screening.

Finally, I wanted to add a few words about Jack & Diane, which has already been covered by my contributor in her post. Originally tantalisingly presented as a lesbian werewolves film with Kylie Minogue, the finished product turned out to be something else completely, so do not go and see it based on that description alone.

Rather it is a lo-fi indie romance between two young women, with a dark and surreal touch, as earnest and clumsy as a first love, featuring the always captivating Juno Temple and great newcomer Riley Keough. Without spoiling too much, the werewolves scenes occupy perhaps less than one minute of running time, but the creature design is brilliant. Eschewing any cheap CGI, they look like something that David Cronenberg's cat might throw up, a magma of flesh and hair. Punctuating the film are short stop-motion clips of flesh and hair in turnmoil by the absolutely brilliant Quay Brothers (watch their Piano Tuner Of Earthquakes and thank me forever). As for Kylie Minogue, continuing her trend of high class art house cameos after Holy Motors, her screen presence is about as long as it is in the trailer, but she continues to prove that there is an untapped acting talent in her screaming to get out.

A graphically Cronenbergian virus got hold of me on the night after Jack & Diane's screening and sadly put an abrupt end to the festival for me, so I did not see any more films. But I am looking forward to the next editions still. While I sometimes lament the lack of originality of the themes presented (90% of the stories involve a forbidden love in a conservative country or a coming out story), it is refreshing that emerging voices in queer cinema like Travis Mathews manage to take it into new and unchartered territories. A debate was raging as to whether the festival should change its name but I cannot see why it would need to, or it risks losing its identity. It is also very encouraging that a sizeable and growing non LGB crowd is now attending the festival, as a good film should be able to engage any audience.