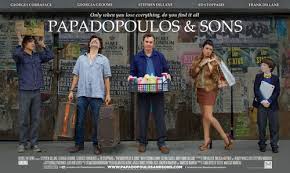 Audience award winner at the Thessaloniki Film Festival, Papadopoulos & Sons is a London set film written and directed by Marcus Markou. The story revolves around the sudden change in fortunes of millionaire businessman Harry Papadopoulos (Stephen Dillane - Stannis Baratheon in Game of Thrones) as his world comes crashing down in the wake of the financial crisis. Widowed Harry loses everything - his fancy mansion and luxury cars, everything except the forgotten Three Brothers Fish & Chip shop, that he started long ago with his now long lost brother Spiros.

Now onto Spiros (Georges Corraface - a real Greek - by way of being French of Greek descent),he adds a humorous joviality to the story with his optimism. The issue I had with this film is that the casting of two brothers - one who is so British in looks and manners, very reserved and unemotional, and the other who is the wild, carefree hippy type who has a French accent, just didn't work for me. I will also add that Harry's three children also create confusion as the first two look like they could be British Greeks, but the youngest is a freckled red head. Unbelievable casting choices like this is one of my pet hates, it's like when teenage children are cast much shorter than their on screen parents - its rediculous as children are always taller than their parents.


Seeing his brother financially ruined and wanting to mend their relationship, Spiros suggests that the family move in with him above the chip shop and set the business up again. The underlying tone to the film is one of the importance of family, and how money can't buy happiness. Harry embarks on a journey to regain some of the passion and joy he had when first starting his business. We see him try to negotiate a deal to save some of his empire, aided by the super annoying Rob (Ed Stoppard as styled by TOWIE) the slimy business man. His character is all the cliches you imagine of those greedy types, who revel in making money from others bad luck. Rob's side kick Sophie (Cosima Shaw, a German/American actress from Berlin who you may of seen in V for Vendetta, and Dr Who)is sweet as the romantic interest for Harry. Just what every successful city broker would want - a bankrupt father of three, who works in a fish and chip shop. 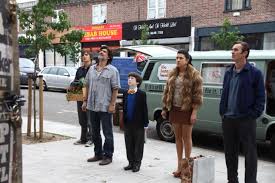 So much of the film is cliched and unbelievable but there is certain charm to the story to of brotherly love, and family bonding. The mini war with the Turkish kebab shop across the road, is further inflamed when Harry's daughter Katie,(Georgia Groome - perfect as the spoilt little princess, and she's looks completely Greek!) starts dating Mehmet from the kebab shop. Mehmet (Cesare Taurasi - Piero de Medici from the Borgias) is probably the most likeable character in the whole film, he has a goofy innocence about him.
Billed as a Greek 'East is East', there is certain similarity, and for his first feature film Markou, has obviously drawn on his own Greek heritage, however I would of preferred it to be more Greek and less Fish and Chips. Papadopoulos & Son's will be in cinemas from April 5th.