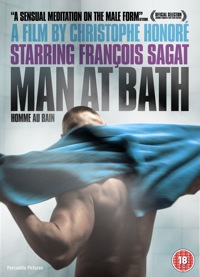 The name Francois Sagat will either means absolutely nothing to you or be terribly familiar, depending on your orientation. The French actor has made a name for himself in the gay adult industry before recently branching out with appearances in more mainstream films and music videos. There was a cameo as an unbelievably buff heroin addict in Saw 6. And then a leading part in L.A. Zombie by Bruce LaBruce as a buff zombie, arguably not much of a stretch from his previous career considering the content and lack of dialogue.

In Man at Bath, his first proper starring part outside the adult industry, Francois Sagat is filmed playing pretty much a variation of himself, in a story involving a lot of nudity still, but that also requires him to flex his, aherm, acting muscles. Directed by Christophe Honore (Dans Paris, Les Chansons d'Amour...), Man at Bath (or L'Homme au Bain) is the kind of small and experimental project that the French director's meteoric rise in the ranks of French cinema might not allow him to make in the near future.

The premise is rather slight. Two lovers, Emmanuel (Francois Sagat) and Omar (Omar Ben Sellem), are preparing to say goodbye and as we understand, split up, as the latter is going away to New York for work. Left behind in Gennevilliers (a rough Parisian "banlieue"), Emmanuel wanders around, trying to fill the emotional void with passing lovers. Across the pond, Omar, alongside French actress Chiara Mastroianni (playing herself), is promoting his new film.

The film is not easy to categorise. It is not quite fiction, not quite documentary, and yet a little bit of both. As the two lovers spend the majority of their time apart, the film is split in two very different parts. The Gennevilliers/Francois Sagat part is very much a love letter from the director to his lead actor. The title sounds more appropriate for a painting than a film and this is not an accident. Indeed it is actually inspired by a painting of the same name, by French painter Gustave Caillebotte. And the film is above all a celebration of Francois Sagat's statuesque body, lovingly shot under various angles and with very little or no clothes at all. as he goes through several hot and steamy encounters.


It is worth noting that the word hot in French also has another meaning as rough, in the context of an area. And Christophe Honore plays with bost aspects of the words, filming in a rough "banlieue" (suburb) with a notorious reputation for crime, yet showing a fantasised vision where hot men wander around in search of their next lover and can casually pick up some rough trade with no fear of adverse reaction. So, as I said, an idealised vision. Try to let your eyes linger for too long on some hot piece of rough in Gennevilliers in real life, and see your life quickly flashes before your very eyes!

In New York, following Omar, Christophe Honore actually uses real footage he had filmed on a small digital camera during the promotionial tour of his previous film (Non ma fille, tu n'iras pas danser) with his actress Chiara Mastroianni, that are inserted in the movie as if they were shot by Francois Sagat's lover, blurring the line between fiction and reality. These scenes feel a little superfluous, and in parts almost uncomfortable when the crew pick up a young Canadian student, fan of the actress, and they take him back to their hotel where he gets naked and plays with himself for the camera. Since we know this is actually Christophe Honore filming, this has a slight whiff of exploitation and we are left wondering whether the young man is indeed an actor and the whole thing was scripted, or whether we get a rather too close look into the director's private life.

This is obviously a niche project that is destined to a limited audience. And yet it is not without its qualities. Francois Sagat has an undeniable presence, and I am not just taking of his obvious assets. He certainly seems to be having a lot of fun playing with his iconic image as an object of desire. And he director has elicited an intense performance from him, which bodes well for a potential mainstream career. (In case you are wondering, his past would never be a hindrance for a potential career, this is France we are talking about after all!)

Christophe Honore also manages to portray the sensual relationship between the two men and their subsequent lovers in a refreshingly graphic and natural way. Homosexuality is not the theme, it is not an issue, the director is simply filming two men in and out of love, following their heart and desire. And the largely improvised scenes in Gennevilliers have a certain charm to them. If only the director of Dans Paris had sticked to those. I feel the New York part would have worked a lot better by itself, as an intimate self portrait of the director during his promotional tour. Yet in here, they do feel at odd with what we have seen before them, and the two halves of the film never quite come together.

As a curious and experimental piece of French cinema, and for those who are curious to see Francois Sagat expand his range, this is still definitely worth seeing. Man at Bath is out on DVD on the 29th of August. I cannot embed the trailer due to Blogger's strict policy regarding nudity, so check it out on YouTube!
at 23:43