Give Faye Dunaway Some Money! 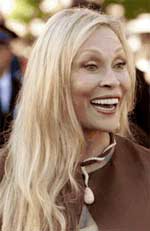 I came across a rather distressing article online about Faye Dunaway a few days ago. The iconic actress lives isolated in a modest house in a poor part of Los Angeles. Despite having just turned 70, she is hard working on a project she is directing and starring in, Master Class, where she plays Maria Callas despite being about twenty years too old for the part. She is in poor health and is fighting a court case relating to the film's production. Where did it all go wrong? And, do we, film fans, not owe it to her to help her? 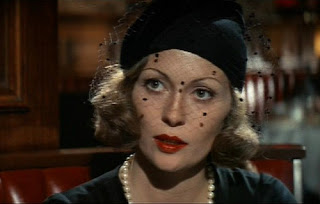 My first cinematic encounter with her came when, as an impressionable young child, I saw her as villainous cougar/witch Selena in 80's turkey Supergirl (1984), one not to be missed for true amateurs of high camp 80's trash. It was only a few years later that I realised what an amazing and beautiful actress she was. In the late 60's and the whole of the 70's, she reigned supreme in Hollywood, with a string of masterpieces to her name: Bonnie and Clyde, Chinatown, Three Days of the Condor and Network, for which she won her only Oscar. She was smart, she was beautiful, she was talented, having made a speciality of playing strong women.

But Hollywood is a capricious lover and things went on a downward slope for her in the late 70's, from which her career never recovered. There was the bizarre and forgettable thriller The Eyes of Laura Mars (1978), atrocious and camp classic Mommie dearest (1981), which saw her play Joan Crawford, the aforementioned Supergirl... Her career did see some flashes of quality after that (Barfly, Arizona Dream...) but mostly, it was bit parts in mediocre films and tv series.


I remember a sad anecdote about her. She got persuaded to take a part in Luc Besson's Joan of Arc (1999), having seen fellow ageing thesp Virna Lisa win a best actress prize at the Cannes Film Festival for a rather similar part in period drama La Reine Margot in 1994, and was hoping for a similar nod which of course, did not happen. Surely she should have done some research, Luc Besson certainly is no Patrice Chereau!

So here we are now, a woman who has just turned 70, who should have retired by now, who should be enjoying her golden years in a waterfront house in Malibu, granting audience to star struck fans now and then, basking in their undying adoration. Fair enough there might be some more deserving causes. And what happened to the millions she must have earned throughout her career, while the rest of us slave up during the week and cannot even afford a mortgage? But then she is not like us, mere mortals, she concentrated most of her time on being amazing, do you really think she had time for such petty considerations as a mortgage and a pension plan? 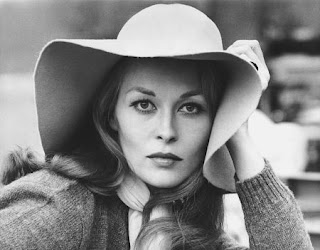 So I'm saying, Meryl, you do not need that third Oscar in 2012, and besides, The Iron Lady looks rubbish anyway! Let's all start a fan funding campaign on Twitter for Miss Dunaway, and to the Academy, please give her that elusive second Oscar for Master Class, so that she never has to star in anything called The Seduction of Dr Fugazzi or tv movie A Family Thanksgiving and can finally retire. We, fickle film fans, owe it to her! And let's take a look at the Supergirl trailer while we are at it, and chuckle!