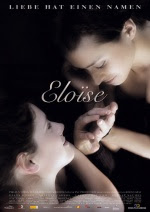 There are two types of 'lesbian' films, those directed by a man and those directed by a woman. Male directors have a penchant for their lesbians being very girly and wearing short skirts whereas female directors put a more feminist slant on things and often include a few other lesbians.
Eloise is a blend of both elements as it’s directed by Jesus Garay, a Spanish director, writer & actor, and the screenplay is by Cristina Moncunill a writer, director and musician from Barcelona. So we get mini-skirts plus the believable lesbian, Eloise, who is what I like to call a 'converter' focusing on beautiful straight girls. 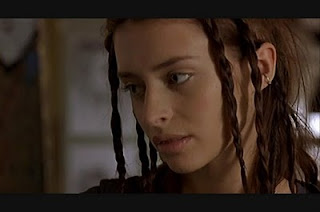 This being a Spanish film, it’s much tamer than some of the films from the USA & UK, with the exception of 'Room in Rome' which broke the nudity boundaries, but on the whole the film has a delicate innocence about it. Something that seems to keep cropping up in Lesbian cinema lately is the obligatory swimming pool scenes and if there was an award for most prominent nipples in a film then it would surely win (the swimming pool must have been very cold!).
But before the nipples, there are other things to contend with, namely a young woman lying in a coma and her life being told in a series of flashbacks and flash-forwards to what might have been. The girl in the coma is Asia, played by the excellent Diana Gomez, who has had many roles on Spanish & Catalan TV. Asia is living a rather mundane existence in an unspecified town in Catalunya. She studies architecture and her two best friends are the gossipy type, one of whom seems intent on stealing her boyfriend. The boyfriend is Nathaniel, played by Bernat Saumell in his first feature length film, a sweet but dull guy who is more interested in watching football with his mates than going to the ballet with Asia.

An advert on the university pinup board for an artist’s model prompts Asia to apply on an impulsive spur of the moment idea. This, in turn, leads her to the artist Eloise, a perfect escape from her obsessively perfect and overbearing mother who has stifled her for so long. There is an instant chemistry between the two girls and this starts to cause major confusion for Asia who had never imagined she could be a lesbian. Her relative disinterest in the boyfriend should have been a clue but she is shown to be quite an innocent girl.
Eloise is played by Ariadna Cabrol who brings intensity to the role and lips to match Angelina Jolie's anyday. Ariadna has done a variety of things from a Hindi film to a Serbian horror 'Zone of the Dead'. In the role of Eloise she brings to mind a mixture of Lisa Bonet circa Cosby Show in her kooky baggy outfits blended with Winona Ryder in Heathers, all dark and brooding. She is the outsider at uni who people gossip about as she is the only out lesbian on campus. 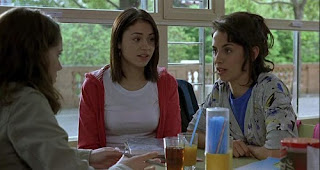 This seems a bit strange in liberal Catalunya, but I watched the film with a friend from Barcelona who informed me that none of the actors accents are from Barcelona and the feeling you get is that they are in a more provincial location. Speaking of Catalunya, it’s very nice to see a film done in Catalan, a rare treat in lesbian cinema. The only other film I can recall in Catalan was the wacky 1995 film 'Costa Brava'.


As the film jumps back and forth from the hospital room where Asia lies in her coma the story unfolds and the contrast between the colour and light of her awakening romance with Eloise contrasts with the sterility of the hospital. The music by Carles Cases goes well with the different moods. The subject of a young woman's lesbian awakening is always interesting but somehow seems to be frought with tragedy all too often. I found the ending showed rather too much but on the whole it’s a film that will appeal to a wide audience and it’s a shame that it didn't make it to the big screen in the UK. It has been released on DVD however, by TLA Releasing.