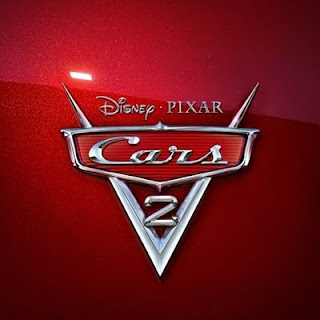 Pixar's latest film, Cars 2, is finally coming out in the UK, a month after its US release. The BFI had organised a preview at the NFT in London last Saturday, followed by a q&a with Pixar legend John Lasseter, which I was lucky to attend, and I will be covering the q&a in a separate post in the next few days. But first, Cars 2.

The decision by Pixar to make a sequel to Cars surprised everybody, considering that the film was their least popular, especially outside the US, despite enjoying a decent run at the box office. It was even more surprising considering their recent stream of constantly innovative projects, turning unlikely and risky premises into films that met with critical and commercial success. Some felt the studio needed a safe bet commercially. Others argued that Cars was John Lasseter's baby, hence the push for a sequel. Ironically, Cars 2 turned out to be their first critical misfire, and after a decent opening, a commercial disappointment, with box office receipts well below some of their riskier projects such as Wall-E and Up. So did it deserve this negative reception? 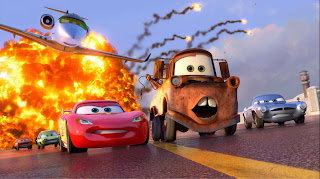 It starts off promisingly. Gone is the nostalgic slice of Americana of the original, we are here transposed into a world of globe trotting espionage, high octane races and fast paced action, with plenty of nods and references to spy movies, old and new. In the thrilling, Bond'esque opening scene, we are introduced to new character Finn McMissile (voiced by Michael Caine), a British intelligence agent on a secret mission. Back in the US, champion Lightning McQueen (Owen Wilson) is about to embark into a serie of races across the globe, taking with him best buddy Mater the tow truck. Due to a misunderstanding, Finn McMissile and his assistant, Holley Shiftwell (Emily Mortimer), mistake the clueless twotruck for an American secret agent, and recruit him on a mission to thwart the unidentified baddie who is destroying race cars for his nefarious masterplan.

The action is absolutely incredible, with some set piece among the best that anything Pixar has ever produced. The attention to detail is simply breathtaking, and the 3D is among the best I have seen in a long time, never gimmicky yet always present and immersive. There is a gorgeous and painstakingly accurate recreation of several world cities, with a special mention for Tokyo, here faithfully reproduced in all of its neon glory. The Japanese capital is also the scene of some of the funniest scenes in the film, based on the culture shock, and anybody who has visited this mad city will love some of the visual jokes. 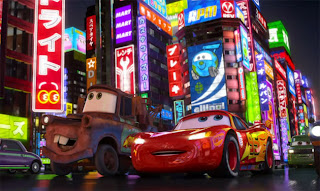 So where does it go wrong? We cannot accuse them of lacking ambition, with a much bigger scale than the original film. The mistake here however was to bring back some characters from the mildly popular first film, and worse, make Mater the tow truck the lead character, relegating Lightning McQueen to a mere plot device. Voiced by somebody called Larry the Cable Guy (who?!), his fish out of water routine is particularly grating, earning him the Jar-Jar Binks title of most irritating Pixar character ever. It is all the more frustrating as the studio has always had such a deft hand at producing some of the most likeable characters in modern animation.

Pixar should have made the bold move of completely dropping the characters of the original, and made this an indirect sequel, using the Cars universe as laid out by the first film but giving centre stage to Finn McMissile and Holley Shiftwell. Michael Caine and Emily Mortimer bring their considerable talent to the proceedings but are hindered by their interaction with Mater the tow truck, who belongs more to lame spy comedies such as The spy who knew too little, or Spy Hard. 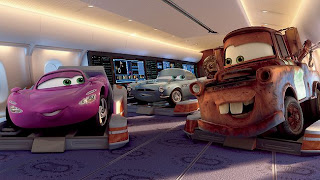 As a result, despite the thrilling action, the whole thing is rather uninvolving and with a two hours running time, overlong. It might seem unfair to judge Pixar so harshly, and compared to the formulaic output from its rivals, it is still way above any animated film that has come out this year. But when we have been used to a never ending stream of masterpieces (Toy Story, The Incredibles, Finding Nemo, Wall-E, Up...), we feel entitled to judge this against what came before it. Any animation and/or Pixar die-hard fans should still see it however, for the sheer technical brilliance, and, as an added bonus, for the Toy Story short that precedes it, Hawaiian Vacation, which is absolutely hilarious and worth the admission price alone.

There is no danger that Pixar might be on a downward slope however, and I am sure this will be remembered as a mere blip. Their next project, Brave, set in a world of fairytale, and starring a lead female character for the first time in their history, looks as exciting as some of their best films, and when John Lasseter briefly discussed it at the q&a, he could barely contain his enthusiasm. A stunning teaser has already been released.