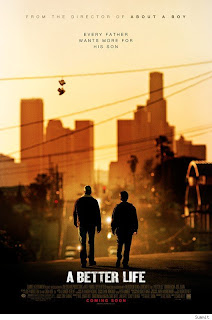 Sometimes it can take a long while for an idea to come to fruition and make it to the big screen. In the case of ‘A Better Life’, it was almost 25 years in the making. For producer Paul Junger Witt, a story he heard about an illegal Mexican gardener having his truck stolen, gave him the idea for a film. However, it wasn’t till the screenplay by Eric Eason had been completed and studio funding found that work could really start. The last film written by Eason was ‘Manito’, which he also directed. Given the ongoing debates in the US presently overillegal immigrants, the release of the film in July will have a lot more impact than had it been made all those years ago.

Chris Weitz, better known for directing ‘New Moon’ - or ‘Luna Nueva’ to me, as I saw it in Spain dubbed in Spanish, and this made it all the more appealing as I got to practice my Spanish - has finally been given the chance to make the kind of film that comes from the heart and is only too real in the portrayal of the life of those at the bottom of LA’s workforce. He has done his time directing and producing many big budget films and with ‘A Better Life’ comes his indie socially-aware moment. The story of a Mexican father and his US born son is quite a departure from what we have previously seen from Weitz.


He got his start in 1998 as a co-writer on the animated film ‘Antz’. Moving on from that Weitz and his brother Paul, produced and directed the smash hit teen film, American Pie. ‘The Golden Compass’ was also eventually directed by Weitz, despite some hiccups at the start. It’s nice to see a director not getting stuck in the one genre, and perhaps his own Mexican heritage led him to ‘A Better Life’. Weitz’s grandmother is Lupita Tovar, a famous Mexican actress from the silent film days. It takes a lot of confidence to get a studio to back a film like this, as unfortunately it will not appeal to the mass market. Weitz, however, did such a good job on ‘New Moon’ that Summit Entertainment put up the main funds. Interestingly enough, despite also being married to a Cuban-Mexican, Weitz was not fluent in Spanish. He started to learn the language intensively at the start of production and by the end of filming was fairly fluent.
The day starts very early in the Galindo household. Carlos, played by the excellent Demian Bichir, has a tough life as an illegal immigrant working all day, every day as a gardener. He sleeps on the sofa whilst his son gets the bedroom in the small east LA home they share. The opening scenes are filled with soft light as the day breaks and this use of warmth in the lighting permeates the entire film. Although their surroundings are shabby, there is also the beauty in the simple things, like the garden Carlos has created at home, showing that he must actually like the work that he does. His son is 14 year old Luis, played by newcomer Jose Julian. He is your typical surly teen, uncommunicative and ungrateful. As the son of an illegal Mexican immigrant with no mother around, he hasn’t had an easy life either. His future is looking bleak, and as his best friend and he talk about their options, it seems that joining a gang is their best option. 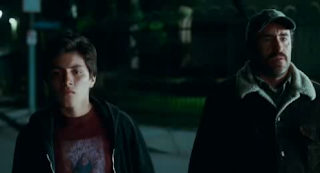 There is a feeling of despair that runs throughout the film. I wanted something good to happen to Carlos and his son, but when he gets a chance to buy his boss’s old truck and gardening equipment, you just want to scream ‘don’t buy it, don’t buy it!’. Somehow you know it’s doomed. Someone who doesn’t even have a driver’s license, or for that matter legal papers, and is willing to put his life savings towards buying a truck, when he knows that the first time the police stop him, it could lead to deportation. However the desire to create a better life for his son and give him the best he can is what pushes him towards the new venture.
With the prevalence of gangs in their area, Carlos, like most parents these days, worries about his son falling in with a bad crowd. At the heart of the film is also the story of a father and son trying to get along. For Carlos it’s not easy due to his grueling workday to get to spend much time with his son, but when they embark on a mission to recover their stolen truck this bonds them together. 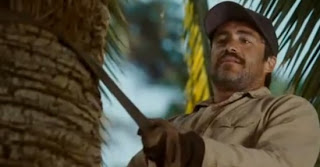 This is Bichir’s first leading role in an American film, and whilst he has done many Mexican films it looks like his film career in the US is really taking off. We will see him again in the next Oliver Stone film ‘Savages’, which is now in pre-production. In Mexico, Bichir is a huge star, but unless you watch ‘Weeds’ or saw him in the role of Fidel Castro in the ‘Che’ films, you are unlikely to have seen him before. He is a fairly handsome guy and for the role of Carlos Galindo he has been roughed up a bit, and he brings a certain humbleness to the part.
The casting is all very authentic. Carlos’s sister Anita is played by Dolores Heredia, also a very well known Mexican actor. She is fortunate enough to have married a Mexican American, and compared to her brother, is considered better off. She works long hours and her face portrays the weariness and worry. Many of the extras in the film were found via a connection Weitz made with a priest from East LA, who does a lot of community work with ex-gang members. 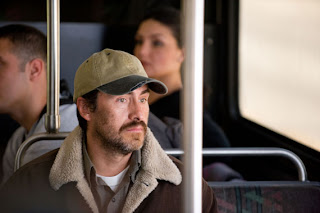 Most of the actors are Mexican or Mexican American, and I thought the film did a good job of showing the realities of their ‘world’ in LA. From the gangs to gardeners, to cowboys at the rodeo, we see a side to life that is rarely shown in US cinema. There is an irony in the fact that California was once Mexico, and even now, almost half of the Los Angeles population originates from south of the border, that someone from Mexico can be considered an ‘Alien’.
I spent some time in LA last year, and it’s a city that you will view differently once you have driven around the many neighborhoods and explored it. We get to go along with Carlos as he and his boss travel around to do their work. The scenes of LA are given a fresh originality by acclaimed Spanish cinematographer, Javier Aguirresarobe. He worked with Weitz on New Moon, but this is his first LA based film and he brings an outsider’s perspective to a city that we have all seen many times.
The final scenes are very moving, and bring to a head the main theme of the film, which is really about a father and son’s relationship and the struggle to survive. This is something many people can relate to, given the general lack of real communication between many parents and their children. I hope it reaches the wide audience it deserves. For UK viewers the film will be released on the 29th July.