The Thing Prequel's first trailer: It's not human. Yet. 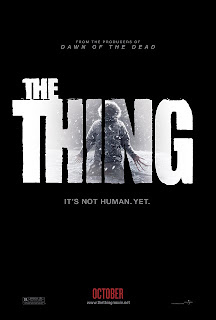 And we carry on with the catalogue of remakes/reboots from horror classics from the 70's and 80's. In actual fact, we have already reached the stage where we are rebooting reboots, with the Texas Chainsaw Massacre on course for a roaring 3D reboot next year, a mere 6 years after the prequel to the remake came out. It was only a matter of time before John Carpenter's masterpiece, The Thing, got the prequel treatment. In fact, this film has had a long gestation, and a much delayed release date, which is never a good sign. The film will finally be released this autumn however, and a first trailer has come out.


The John Carpenter's version was itself actually a remake from the 50's original, which is held as a classic by some, and which I personally find incredibly dull. The 80's version however is one of my two favourite horrors of all time (that and the Shining) and is absolute perfection as far as I am concerned. It follows an expedition in the Antarctic, that comes into contact with a shape shifting alien that assumes the appearance of the victims it kills. When the crew members realise what is happening to them, paranoia runs deep. With this, the director crafted a visceral masterpiece that stands the test of time.

The desolated surroundings, the relentlessly intense and paranoid atmosphere, the gut wrenching special effects, responsible for many classic scenes (the crawling head anybody?), right until the downbeat ending, one of the best ever. And one of the best aspect of the original was the element of isolation, not just physical isolation, but a mental one too, since none of the crew could trust anybody to be who they were supposed to be.


It is surprising how much this new trailer is showing, even revealing . It would have made more sense to release a short teaser at first, merely increasing the exposure without showing much. Because where do we go from here? The release date is three months away, and revealing any more and they might as well screen the whole film.


The 80's version left some unanswered questions about the first Norwegian expedition that came into contact with the alien before the film started and their demise, so it seems logical to use this as a premise for a prequel. And hence lies the first problem. If it is a true prequel, then logically nobody will make it to the end apart from the Norwegian that gets shot at the start of the 80's version. But somehow I cannot see that happens (even if the recent Texas Chainsaw Massacre prequel had the guts, so to speak, to follow a similar logic to its conclusion).

But one of the main problem is the opening of the trailer and what it implied. The scariest part about the 80's version was that nobody outside the base knew what was happening to them, and their inability the communicate the alien threat that was about to unleash itself onto the world, as they had discovered the creature by accident. In here, the expedition actually make their way to the Antarctic to analyse the alien object that has been found, so there must be a fair few people aware of it, therefore losing the element of insidious threat.


There is also a catch 22 situation with the remake when it comes to the special effects. The much lauded animatronic effects, showing the creature twisting its human body hosts in hideously deformed shapes, as groundbreaking as they were at the time, and no matter how incredibly they look still now, simply could not be recreated or risk losing dated. And the problem with modern CGI is that we still miss that physical presence that makes creature so believable. They are just too fast and, well, too digital looking.


For what we can see, this is will a more action orientated film, whereas the original relied on a slow pace that made the short burst of occasional violence all the more shocking and memorable. And the creature seems a lot more brazen in its attacks, whereas the original only attacked in the open as a last resort, using his mimicking ability instead, making it so much scarier.

I will keep an open mind for this but I do feel that this is the one horror classic left that should have been left well alone. And at least it has the always interesting Mary Elizabeth Winstead in the lead. The new poster is not great. And what with the razor hand, did somebody got mixed with Nightmare on Elm Street when designing it? At least the tagline is excellent: It's not Human. Yet.