Pixar's John Lasseter Q&A at the NFT in London


The British Film Institute in London had a special treat for Pixar's fan last week end: A preview of Cars 2 followed by a short Q&A with animation legend and Pixar's honcho John Lasseter. It is almost a shame that he had to take the stage after what will remain as one of the rare misfires from the studios but he showed so much all-round enthusiasm that it would have been hard to bear a grudge against him. The legendary studio is actually celebrating its 25th anniversary this year but, according to him, they were too busy to notice!

He was so chatty that few questions were asked to him eventually and this was almost more of a talk than a Q&A, but he certainly gave an interesting insight into Pixar and his love for his craft. It was hard to believe that the man on stage was the legend responsible for so many masterpieces! 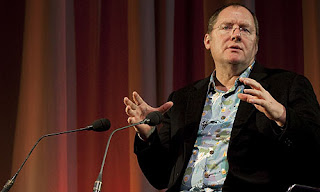 The popular and perhaps simplistic vision of American studios is one of greed over artistic value, of directors and scriptwriters being used and having their vision crushed for the sake of a quick buck. Yet he made it very clear that this is just not how things work at Pixar. Unlike other, executive focused studios, they are one of the few that allows their directors to follow through with their idea, and they give them absolute freedom, without giving any of the much dreaded director's notes. And in his position of Director and Chief Creative Officer at Pixar AND Disney, he has made sure that they followed suit. Indeed, since Disney was his inspiration and the studio that gave him his first job, he feels grateful to be able to support them and their artists.

He explained that there is a complete lack of hierarchy when it comes to ideas. Everybody, no matter their level, is encouraged to express their opinions. Obviously the process of putting together an animation film is a lot more rigid than a live action. And it almost works in reverse to live action, when editing ultimately makes the film, unlike an animation when the storyboard and the script have to be perfect. 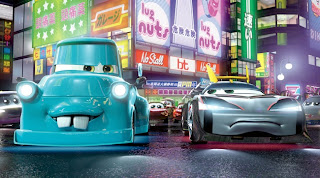 So during the process of making a film, which usually takes four years, they put together a showreel which is screened every three months to the whole of the company, so that everybody can make some comments and suggestions before the animation works begins in earnest. Compared to some studios that do not even allow directors the final cut to their own films, this certainly is refreshing! And they are not afraid to can entire scenes (or "spank" them as they call it), following negative feedback. In Cars 2 for example, a whole part set in Oktoberfest was "spanked".

Indeed Cars 2 was originally supposed to feature five races instead of three, but two in Munich and Paris were canned as they made the film too long. Speaking about Cars 2, which we have a feeling holds a special place in his director's heart, the inspiration came from his love of spy movies old and new, from James Bond to Jason Bourne, as well as an idea he had of a film within the film in the first Cars that was already supposed to feature Finn McMissile.

No matter what you think about the film, you cannot deny the painstaking attention to details, a trademark of all Pixar films, and he explained how teams of animators are sent around the world, in this case in all the cities represented, taking thousands of pictures to faithfully recreate them. This is also how they recreated the exotic location in Up, following a trip in a unexplored part of a jungle in South America.

He was then asked about the 3D and revealed he is a real advocate for it, and it shows, given that the 3D in Cars 2 is one of the best I have ever seen. He explained how he has always believed in it, ever since the 80's when he did some pioneer work on holographic photography and 3D cameras. And before the modern digital 3D existed, Pixar did a 3D short in 1989 called The Snowman.

A member of the audience then asked him how the studio handles the conflict between artistic vision and commercial imperatives but he explained it did not exist as far as they are concerned, and we were quite happy to believe him. If they believe a film is good, they will make it, simple as that. Pixar does seem to have found a golden touch that allows them to transform risky premises into critical and commercial hits.

Interestingly, he explained that the conflict was not so much with the films themselves, but the merchandise that comes along, as the major toy retailers can be hard to convince that characters will transform into best selling toys. The best example would be with Up, where a grumpy old man and a fat kid might not have seemed like obvious top choices for a Christmas present! So the retailers refused to produce a line, pinning their hopes on Speed Driver toys instead, and we all know what happened to that film! (Incidentally, I am a big fan but this is a different story). 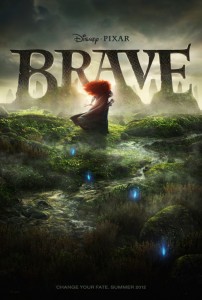 And then there was just time for a few words on upcoming projects. Or no words in the case of Toy Story 4, which he refused to comment on. He did speak about next year's Brave, a fairytale set in Scotland with a female lead (a first for Pixar) that looks absolutely fantastic and that he obviously seems very excited about. One last project caught my attention however, a film that will be made under the Disney banner, called Rocket Charlie. This will feature a 80's retro video game character (think Dig Dug) finding himself transported into a world of modern video games, ie FPS such as Halos and cute, brightly coloured Nintendo games. As a not so closeted nerd I am already wetting myself at the prospect!


That was to conclude the talk, and the impression he left us was of a man that has seemingly managed the impossible, keeping his vision intact in the face of the Hollywood machine, while still achieving creative and commercial success.