The discrete charm of 70's French Exploitation: Requiem for a Vampire 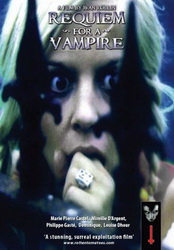 The beauty of services such as Netflix and Lovefilm, is that they have allowed a whole bunch of film fans to get hold of more obscure titles that they would have been unable to find at their local dvd rental store before, hence increasing their curiosity and creating a demand for more titles, old and new, to be released. That and the advent of IMDB (how did we ever live without it?).

How else could you explain the release of the late French director Jean Rollin's movies on dvd in the UK? The man was at his most active in the 70's and early 80's, and I had vague memories of reading about him, and of his reputation for churning out lame softcore films with added violence, before fading into obscurity. 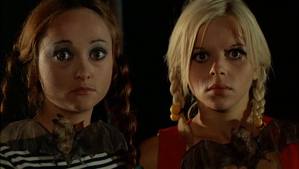 Curiosity got the best of me however and I added Requiem for a Vampire (1971) to my Lovefilm list. Having been scarred for life by pretentious and nearly unwatchable 70's "classic", The Beast by Walerian Borowczyk, which featured a similar mix of nudity and violence, with an added pseudo philosophical undertone, I feared the worst.

Yet this turned out to be a rather pleasant surprise. Don't get me wrong, this is a bad film, a really bad film. The story makes no sense whatsoever, the pace is far too slow, the acting approximative and the whole thing has dated terribly.

However there is a discreet charm to it. This might be exploitation, but exploitation with a French touch. And they do it with their unmistakable taste and, dare I say, class. The older actors utter their lines as if they were in the adaptation of some classic. The sets make you feel like you are attending the an amateur play on a balmy summer evening in Aix en Provence. And the two young ingenues look more like they belong to an Eric Rohmer movie than this kind of smut.

There is a certain surreal poetry of randomness that pervades the film. Take the opening scene for example. Our two leading ladies, dressed up as clowns (?!), are fleeing a school fete with an accomplice on a car, except that this end up as a shoot out with the police who kill their companion! I never knew schools were that strict in the 70's? They then wander in deserted landscapes at dusk, with no dialogues, and with one of them ending up nearly buried alive when she trips on an open grave.

They end up captive of a vampire cult, with the nefarious plans to turn them into creatures of the night, but do not expect the action to ramp up. There is a bit of violence thrown in, a bit of whipping added to please the most lecherous viewers but mostly, the dreamy and languid tone carries on. And surely, members of an evil cult with that sort of classically trained diction cannot be all that bad? Despite an obviously tiny budget, the director makes a good use of some fairy tales like locations.

In a way, with the plastic bats and old school vampires with capes, this feels like what would have happened if Eric Rohmer on a naughty day had made a film for the Hammer studios. There is even a rather touching emphasis on the girl's friendship, which gets tested when one of them contemplates taking the satanic gift and betraying her friend. And then it all culminates with a poetic and darkly romantic ending.

The British edition is heavily cut, and I might have passed a very different judgement on this if all the violence and smut had been kept in. Nevertheless, this is an oddity that deserves to be seen, provided you are a fan of truly obscure and alternative cinema.