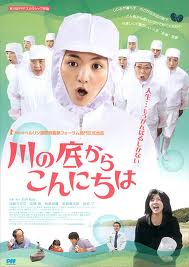 Sawako is not having the best of times. Having moved to Tokyo five years ago under dubious circumstances, she finds herself in a dead-end job (she is on her fifth job in five years), and has a boring and unsuitable boy-friend who wears tight jumpers that he knits himself (her fifth boy-friend in five years, can you see a pattern?). If she was British, she would be called Bridget Jones, down Baileys in her oversized pants like there is no tomorrow and have a bunch of obnoxious, I mean, zany friends who swear a lot. But Sawako is Japanese, and she lives in the real world. So she gazes pensively, wondering where it all went wrong, and has refreshing colonic irrigations hoping to flush out painful memories of her exes.

Going nowhere, she decides to go back to her home village, with her recently sacked boy-friend in tow, to attend her ailing father. Having hit rock-bottom, will she be able to revive the fortunes of her family's company, and finally earns the respect she deserves? 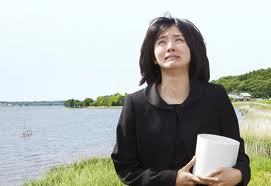 As much as I love Japanese cinema, I tend to be a bit wary of their quirky comedies, who do not  always translate so well, and only rarely make it to Western cinemas. Fortunately Sawako Decides is a more subdued and deadpan comedy. There is a self depreciative sense of humour running through that should particularly resonate with a British audience, as our leading lady spends a whole lot of time admitting to having zero ambition and not amounting to much. And Hikari Mitshushima as Sawako has a real talent for expressing quiet resignation in the face of life's trials.

In fact, behind the sly comedy lies a rather harsh portrayal of broken dreams and life's disappointments (which is all the more devastating as Sawako is still a very young woman), as well as provincial boredom and pettiness. Far from being welcomed with open arms, Sawako is met with a downright hostile attitude by her previous friends and the company's employees. Her only crime was to escape her village for a better life, when they were (and still are) left stuck behind. 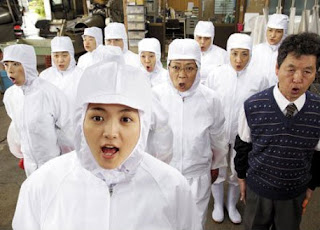 It is not all doom and gloom however, and the film is not without his funny moments. From the early scenes in Tokyo that have a slight air of melancholic and almost surreal humour that reminded me of Aki Kaurismaki's movies, to a scene when Sawako replaces the company's triumphant hymn by one that more truly fits the general mood of acceptance in the face of adversity.

But where director Yuya Ishii truly excels is at creating a gallery of wholly believable characters, skilfully avoiding the kind of simplistic and sentimental tale of empowerment we are so accustomed to in Hollywood movies. That is not to say that Sawako does not learn anything, and there are a few heart warming scenes when she finally manages to tame some of the hostile locals, and found a bit of fighting spirit she never thought she had. But do not expect an easy resolution. This is a more gentle and realistic type of film, and all the more admirable for it.

Sawako Decides will prove a welcome respite for those who only associate Japanese cinema with horror films featuring creepy ladies with long dark hair and wacky comedies. It is out in the UK on the 8th of July and is highly recommended.