John Carter, formerly known as John Carter of Mars, has been going under the radar for quite some time, despite a release date less than a year away, buried as it was in months and months of extensive post-production. Finally, a trailer has been released however. And it's certainly ramped up the excitement as far as I'm concerned!

John Carter tells the story of its eponymous hero, a Civil War veteran who finds himself magically transported to Mars, where he becomes the unlikely saviour of a local race in the midst of its own civil war. Since the trailer was first released a few days ago, I have read that the plot seemed to have slightly been influenced by Avatar, which is a very daft thing to say, as John Carter is actually the adaptation of a series of novel more than a century old, written by Edgar Rice Burroughs (Tarzan), and which has had a major influence on science fiction over the decades. 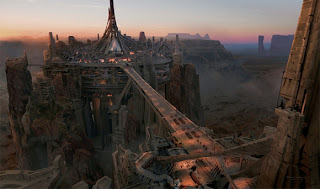 Speaking of Avatar, while I was not won over by its new agey world, and while I do feel that modern sci-fi seems to be lacking in originality, there is a much more interesting design on display in here, one that manages to seamlessly blend modern special effects with a kind of retro pulp novel cover art without looking kitsch. There are welcome echoes of Flash Gordon, Conan the Barbarian and of course of the original material itself, John Carter of Mars. I am particularly impressed with the sweeping and wonderfully evocative vistas, far from the kind of by the numbers cheesy science fiction we are so accustomed to.

Obviously it is difficult to judge a film solely by its trailer and art direction, yet the film comes with a promising pedigree: Pixar's Andrew Stanton (Finding Nemo, Wall-E...) is directing, and it stars Taylor Kitsch in the lead role, who recently impressed with the short part of Gambit in the woeful Wolverine, as well as Mark Strong, Willem Dafoe, Samantha Morton...

John Carter will be released in March 2012, in a slot that has become a platform for more fragile blockbusters recently, such as 300, Watchmen and Sucker Punch, where they do not have to fight in the brutal competition of the summer season, which can make or break films in one single week end. And Disney will be hoping that, with this, they can repeat the success of Alice In Wonderland, which had a similar release date last year and went on to becomes of of its highest grossing films of all times, going unchallenged at the box office for weeks and weeks.

Let's finish with a piece of trivia. There had actually been talks of a John Carter of Mars movie adaptation by John McTiernan with Julia Roberts and Tom Cruise, back in the 90's when they were at the peak of their careers. It never went very far as the technology just was not there to do it justice at the time but I wonder how it would have turned out!
at 22:12