The Adventures of Tintin: The Secret of the Unicorn's full trailer 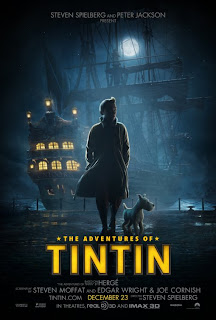 As the release date is now fast approaching, and after a rather underwhelming teaser, a full new trailer for The Adventures of Tintin: The Secret of the Unicorn has now been released. And while it is an improvement on the teaser, the problems I originally had with it remain.

A Tintin adaptation had been a pet project from Steven Spielberg since the 80's. And for years, he has been wondering with what medium to adapt it with to do it justice, whether as a live-action film or animation. Indeed, the charm of the original Tintin comics largely reside in its unique graphic style, as it was drawn following what is called "La ligne claire", or the clear line, which is fairly self-explanatory if you look at the image below. 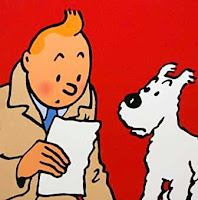 Some ghastly French live action films were released in the 70's, but more successfully, a very faithful animated adaptation was produced in Europe in the 90's, and looked as if the pages were coming to life, given how close it was graphically. It is actually available to rent in the UK through Lovefilm, and I found a video of it.

That approach would just not have worked however for a modern big screen adaptation. So the Indiana Jones director has settled for motion-capture, or mo-cap, and with this full trailer we get a better feel for it. The adventure has been ramped up, and we get a clearer idea of the story. There is a sense of old fashioned adventure that it faithful to the original material, and which means the films (a sequel is alredy on its way), will be mercifully devoid modern pop culture references that poison the majority of animation that have come out over the last few years.

But while it does look gorgeous, with some impressive backgrounds, I still feel it misses the charm of the comics, graphically. And then the mo-cap... We see more of the characters this time, and while there is undoubtedly an improvement on recent mo-cap films, such as The Polar Express and Beowulf, it is still not convincing. In some scenes, Tintin looks like the illegitimate son of Mr Potato head and a carrot, with eyes that looks too small for his big head. Captain Haddock is not all that faithful graphically to the original character. And they all look like animated puppets, lacking of expression.

The studio must be well aware of the lack of awareness of Tintin in the US as, unusually for such a big production, it will be released there last, after every major markets. While the release dates are spread from mid October to November in the rest of the world, the US will have to wait for Christmas to watch it, hopefully preceded by a positive hype from the rest of the world. Unless it receives a critical mauling and a poor reception, in which case this strategy will backfires completely!

One thing does give me hope however, and it is the script, co-written by Steven Moffat (Dr Who), Edgar Wright (Shaun of the Dead, Hot Fuzz), and Joe Cornish (Attack the Block). Surely with those three on board, the mixture of old school adventure and wit of the comic books is in safe hands?