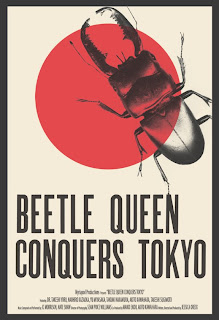 If there was an Oscar for best title, (and frankly, there should be one), we would have a serious contender with Beetle Queen Conquers Tokyo. It conjures images of a cheesy sci-fi with a plastic giant beetle, or of a particularly twisted sequel to the Human Centipede. But this is actually a documentary, about the obsession of the Japanese for insects, and more broadly their relationship with nature.

While the documentary genre has risen to new heights of popularity over the last decade, it is rare to see one that breaks the mould. I am especially growing tired of the jokey approach from Michael Moore and Morgan Spurlock (Supersize me), with their fancy graphics and a director that becomes the central subject of the film. So it is refreshing that American director Jessica Oreck has gone for a different and original approach in her pursuit of this unusual subject.

Rather than boring us with figures and long explanations, she goes for a free flowing and impressionist approach that works particularly well in the context. We jump from vignette to vignette, being introduced to some rather odd people (the bug hunter whose brisk business has put him behind the wheel of a Ferrari!) and strange places, such as the stores who sell live insects to be kept as pets. This fascination really permeates every media, with bug chasing video-games, as well as vending machines selling insects (although that did not surprise me, I did witness on my previous trips to Japan than vending machines sell everything over there, and I do mean everything!)

Intertwined with these scenes are incredible images of insects, larvaes, cocoons... And the director has a real talent for creating striking shots of all these creatures in their otherworldly beauty and strangeness, which should not be too surprising as Jessica Oreck is actually an entomologist by day. 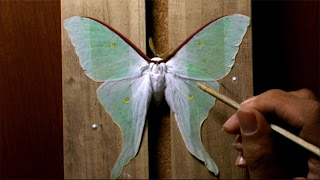 Some earlier reviews I had read before seeing the film lamented the lack of explanation for the keen interest of the Japanese for insects, but it is not only unfair, it is just not true. And indeed as the film unfolds, we understand that the focus is broader than originally thought, with the interest in bugs being only one facet of the Japanese's fascination for nature as a whole.

A Japanese voiceover also introduces us to some relevant aspects of the Japanese culture throughout the film, key to understanding their unusual fascination for creepy crawlies. The expression "mono no aware" is mentioned, which can roughly be described as the awareness of the transience of things which heightens the appreciation of their beauty. And this is a concept that can certainly be applied to nature in general and insects in particular. 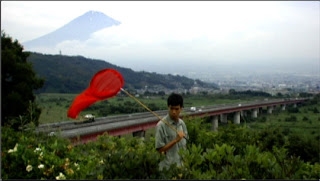 If I have a few qualms about the film, I would have to mention that I did grow tired of scenes of yet another Japanese child playing with his newly acquired insect in his box. And a night scene of a crowd gathering to witness a swarm of fireflies at night falls short of the sense of wonder we are supposed to feel, due to the lack of appropriate camera to capture the lighting properly and the grainy footage. Also I would probably have liked the film to let himself go and be even more experimental in its form. Lastly, the correlation between crawling insects and scenes of crowded streets might not be all that original.

But these are minor quibbles, Beetle Queen Conquers Tokyo is worth seeing for its fascinating insight into the Japanese psyche alone, and its striking and beautiful shots of insects. And Jessica Oreck has certainly established herself as a new talent to follow in the world of documentaries. She is currently working on a new project, The Vanquishing of the Witch Baba Yaga about the interaction of man with the mythic woodlands of Eastern Europe, and the associated fairy tales. And it might not be such a departure from this first film after all, as again the themes are the links between men and nature, and the legacy of old age culture to the modern world.

Beetle Queen Conquers Tokyo has been shown at various film festivals around the world and is currently showing at the ICA in London.