Cannes 2015: The Assassin by Hou Hsiao-hsien 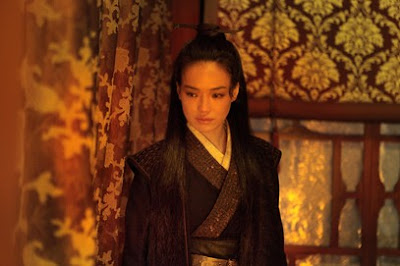 Probably one of the most anticipated films of this year's selection (and so long in the making that some were expecting it to be in Cannes last year), The Assassin is that one film we literally did not know what, being a martial arts film which we knew would be nothing like any we had seen before.

In The Assassin, Nie Yinniang (Shu Qi) is a trained assassin, who was abducted from her family at an early age, and under the wing of a mysterious nun we know little about, who seens Yinniang on various missions, which she accomplishes with a deadly precision. Until the day where she is sent to kill her cousin, and as we find out, her first love, Tian Ji'an, to whom she was promised to. Forced to face her past and long buried emotions, she must chose between remaining faithful to the order of the assassins or to her heart.


The Assassin is indeed not your average martial arts film. The fighting scenes are few and far between, even though they are beautifully filmed, and with flair, making them stand out from any we have seen before. Nie Yinniang lurks in the shadow and glides, striking mercifully without as much as disturbing a silky veil, and disappearing in the shadow with an almost inhuman grace.

Hou Hsiao-hsien has taken its time to deliver this film, and there have been rumours of a troubled production, yet it was all worth it when we finally discover the finite product on screen. That it is pacey is a vast understatement, and yet its mesmerising quality makes it all the more compelling. Every single shot is so beautifully composed, gorgeous an yet not overwrought, with the perfect light, that it often feels as if the director waited days, weeks even, for that perfect shot of a few second.

The languid interior scenes in the palace, all in red and golden hues, in which the camera lingers over characters that remain perfectly still while a gentle breeze caresses the fabric around them are among the most incredible we will see this year. The Taiwanese master has often delivered this artfully melancholic mood before, with films such as The Flowers of Shanghai and Millennium Mambo, but with The Assassin he reaches heights of beauty, towering over anything he has done previously. 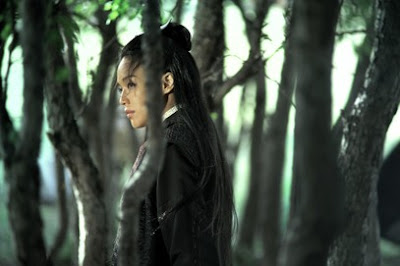 Yes the are few narrative clues, and the story, while fairly simple, is rather hard to follow as a result. But it does not matter, as mesmerising the film is. And there while there is an addition of supernatural, it is as tasteful and as subtle as you would expect from him, with the striking character of a malevolent magician with mysterious motives.

As for Shu Qi, Hu Hsiao-hsien's muse, she is just as ravishing as ever, with a beautifully restrained yet physical performance, whose discrete tears pack a mighty emotional punch, betraying a raging inner turmoil.

As far as I am concerned, Cannes has found its Palme d'Or. It is one of those beautiful and poetic films, like Uncle Boonmee and Holy Motors before it, that transcends anything else seen in the Croisette, and I am hoping that the members of the jury will do more than just offer it a directing prize. I might have seen it on four hours sleep, the night after the Love midnight screening, but I was captivated and enthralled throughout, feeling as if I had just woken from a beautiful dream when the film was over.

The Assassin was presented in Competition in the Official Selection