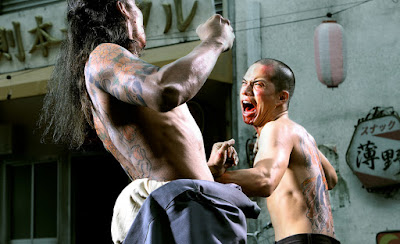 Takashi Miike is among the most prolific directors around, making Woody One Film a year Allen come across as positively lazy and uninspired in comparison, when the Japanese director usually delivers four films a year. And you truly never know what to expect from him, having recently tackled superhero films (with Zebraman 2, because of course, he would make a film called Zebraman 2), to video games adapation such as Phoenix Wright Ace Attorney, as well as the most austere period samurai film, with Hara-Kiri: Death of a Samurai, shown in the Official Selection in Cannes in 2011. This year he is back on the Director's Fortnight with Yakuza Apocalypse.

In Yakuza Apocalypse, a young Yakuza, Kageyama (Hayato Ichihara), is left for dead after a confrontation with a rival syndicate he used to belong to. His boss, who happens to be a vampire, passes on his power to him to allow him to seek his revenge against the syndicate, having to confront some of its weirder members along the way including an English speaking "priest" and a man with psychic powers in a tatty frog costume.


Takashi Miike wasn't present for the screening of his film, a rarity in Cannes in which it is not allowed but for which he had an exemption due to working to about three films at once. He did record a hilarious video introduction for us, dressed as a geisha (as you do). The script summary and this video appearance pretty up sum up the man and his free flowing approach to cinema. And Yakuza Apocalypse has the qualities and flaws of it. 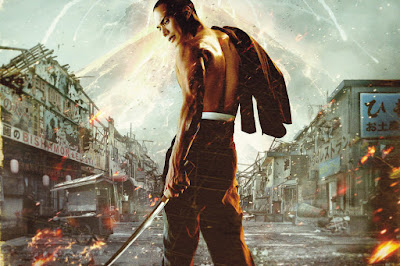 The idea of yakuzas transmitting their abilities and spreading in the way of vampires is original enough. But it does feel a bit like a gimmick that is not really explored from a narrative point of view. The script is gloriously confusing, and feels like so many random elements stitched together at the last minute, based on whatever went through the director 's mind when he was writing the script or on the day of the shoot. It makes for some exhilarating set pieces, with the usual blend of OTT violence.

There's slapstick galore, martial arts, unpenetrable humour, giant monsters... and whatever else, which will satisfy fans of the most extreme and weirdest Asian cinema. But what is amusing at first, becomes rather tiresome in the course of its overlong two hours running time. And some sections really feel as if they were made up as the director went along, including the man in the frog costume, which was probably borrowed from a children programme filming on the studio's next lot. He does make for a striking presence though, with his sadistic streak, and even graced us with a personal appearance at the end of the film, a fitting finish to one of the craziest screening experiences we are likely to have in Cannes this year.

Yakuza Apocalypse was presented at Director's Fortnight at the Cannes Film Festival.