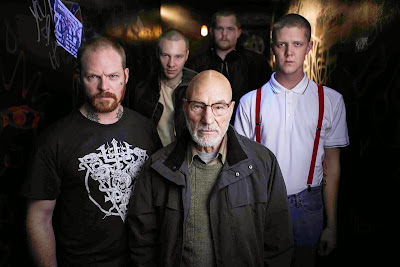 One of the best aspects of Cannes is being among the very first audience in the world to discover films, sometimes without having read any reviews, seen as much as a trailer or even a still. Indeed it is often a complaint for some that films who get a rapturous reception in Cannes do not live up to their growing hype by the time they reach cinemas months later. But sometimes the Cannes hype machine gets into overdrive so quickly that watching a film at the festival itself merely a few hours after its first well received screening can also lead to disappointment, and this is what happened to Green Room as far as I am concerned, after enthusiastic words all over Twitter after its first screening of the day.


Director Jeremy Saulnier made a big impact in Cannes in 2013 with Blue Ruin, a fantastically atmospheric and assured revenge film. And this year he is back in the Director's Fortnight selection with Green Room. In it, members of a punk rock band find themselves trapped and under attack in a small venue in the middle of nowhere by a bunch of neo-nazis after witnessing a murder.

The film starts promisingly, and Jeremy Saulnier's touch, despite his relatively new career, is instantly recognisable. The depiction of a struggling rock band truly living according to their punk ethos, travelling across America in the Pacific Northwest is very vivid, a life spent touring small venues, drinking beers, sleeping in couches and playing for disenfranchised and violent crowds. And just as with Blue Ruin, the director has a wonderfully atmospheric visual style with a tinge of melancholy when filming small-town America.

And after this opening act, filled with ominous signs, all is set for a violent showdown (the director while on stage went: "See you after the film... if you survive!"), especially when Patrick Stewart turns up as the suave head of the neo-nazis. But while it does happen, this is in that middle section that the film crashes and burns, as the director does not seem know what film he wants to make. His evocative style of direction that worked so well in Blue Ruin here ruins does not elicit any kind of tension. Despite the claustrophobic setting (the band spends a large time stuck in a room, surrounded by the neo-nazis and unable to escape), the much needed tension never quite materialises, and it isn't helped by some jokes that sends the tone all over the place. And the film becomes almost boring at that stage.

When the violence finally erupts, it truly is no match for many previous and much better survival films, and the film has none of their intensity or savagery. The gore is not particularly shocking or original, and again we are left with the distinct feeling that Jeremy Saulnier did not know if he wanted to make a trashy genre film fit for drunken, cult midnight screenings, or a more serious drama, and as such, fails on both counts. There might have been the intention to add a message about disillusioned and impoverished small communities turning to extremism originally but the film has actually nothing to say about them. And you keep expecting Patrick Stewart to deliver but he is completely underused and given no particularly memorable scenes, with only Imogen Poots and Macon Blair are given some interesting characters somehow. The film finds it footing again in the last ten minutes or so, with a nasty streak and a fun ending but it is too little too late.

Jeremy Saulnier is such a distinctive talent, and his previous Blue Ruin was such a confident effort, that this mishap is all the more frustrating.

Green Room was presented at Director's Fortnight at the Cannes Film Festival.