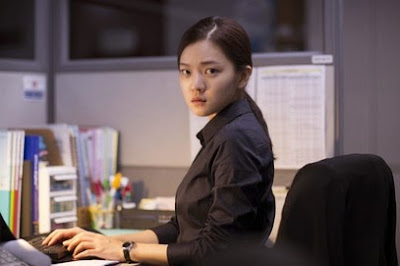 The Midnight Screenings within the official selection at the Cannes Film Festival seem to have been neglected over the last few years and have a distressing lack of proper genre cinema. There are fewer of them (only 3 this year) and the picks are not always inspired. If anything, it feels as if the Director's Fortnight sidebar selection has been grabbing all the best horror/indie/cult films over its last editions. Still, this year we had Amy which was widely celebrated, and everybody has wild hopes for Love tomorrow. And the third film within the Midnight Screening line-up, Office, was unleashed last night.

In Office, the employee of a big corporation slaughters his family in the shocking opening scene before going on the run. An homicide inspector interrogates his colleagues and superiors trying to understand how a seemingly normal man could commit such an act. But there seems to be a culture of secrecy, and the killer seems to be felt or even seen within the premises.


The theme of the corporate jungle, a world in which backstabbing, selfishness and lack of humanity prevail is nothing new in films, so it was an interesting and original idea to push the savagery one step further by making one of the first corporate slashers. And you have to wonder why it has not been done before, especially in our troubled economic days. Indeed there have only been a few rare examples before: Office Killer by Cindy Sherman and to a certain degree, American Psycho. 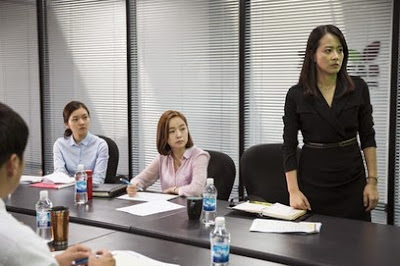 But the problem is, the film does not make much of its premise and suffers from a serious lack of tension and a tonal imbalance. The director wants to make a statement about the unfairness and callousness of  the corporate world, here with an eager but naive young woman from modest origins being shunned in favour of her more recently arrived but prettier colleague with a better social standing. And he the culture of excessively long working hours that is so prevalent in Asia in particular (here staff are expected to work nights and week-ends if required) and the spectacular burnouts that ensue are evoked. But none of it is handled in a particularly original way.

And the first hour seriously drags, we keep expecting for the film to properly start, especially in a few scenes in which work colleagues find themselves working late at night in the nearly empty office, a soulless glass building like so many, which seems to perfect place and time to unleash some bloody mayhem. But it is not to be and the film just flatlines, with some tedious petty rivalry between staff member and some rather modest bullying taking place (we are far from the Glengarry Glen Ross, Margin Call and even, as I suspect, what routinely takes place in most places of work).

And when the violence finally erupts, despite an interesting narrative idea, it is so lazy and unremarkable, with some particularly dull murders, that it fails to have any kind of impact, with an ending that is meant to be ambiguous but instead uses a plot device we have seen a million times before. It is also almost surprising how lifeless the direction is, when (and I appreciate this might be a stereotype) we have been accustomed to so much madness by South Korean cinema previously. Office is about as exciting as a business meeting, a real disappointment considering the fertile premise.

Office was presented in a Midnight Screening as part of the official selection in Cannes, out of competition.