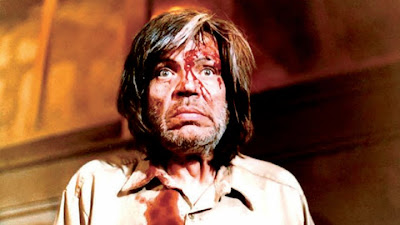 Texan filmmaker Tobe Hooper peaked early. Following his freakout debut with the rarely seen hippie time capsule Eggshells (1969), The Texas Chain Saw Massacre (1974) was only Hooper's second feature, but would go on to become an important and influential classic of atmospheric unease, changing the genre landscape forever and cementing Hooper's permanent place in the horror pantheon. For many, The Texas Chain Saw Massacre is quite simply one of the greatest horror films ever made, a reputation which of course presents a problem for the budding filmmaker: bloom too early (and too exquisitely), and wilting inevitably follows. Even if Hooper would subsequently helm the odd estimable genre title such as Poltergeist (1982) or Lifeforce (1985), his has been a career of steady decline. By the new millennium, barely a quarter century after The Texas Chain Saw Massacre was first digging its hook into stunned cinemagoers, Hooper was directing undistinguished straight-to-video schlock like Crocodile (2000).


As it happens, Eaten Alive (aka Death Trap, aka Starlight Slaughter), Hooper's 1977 follow-up to The Texas Chainsaw Massacre, represents something of a missing link between the director's best known film and Crocodile. On the one hand, its backwoods Texan setting, its super-loose adaptation of a macabre slice of American history (in this case, the story of local hotelier/crocodile owner/serial killer Joe Ball, its symbolic use of a stopped timepiece, the return of Marilyn Burns as a trapped, tormented screamer, its unsettling sound mix of radio songs and musique concrète (composed by Hooper and Wayne Bell), and the motif of a terrified woman (Janus Blyth) being rescued from a crazed, tool-wielding killer by a random passing vehicle, all reprise elements from The Texas Chain Saw Massacre. When the film's protagonist-cum-antagonist Judd (Neville Brand) is heard mumbling to himself, "Judd knows. He knows what he does. They laugh. Laugh. Old fool. Fool", his words clearly echo those of the drunk old man at the cemetery in the opening sequence of The Texas Chain Saw Massacre ("You see, they say that it's just an old man talking. You laugh at an old man, it's them that laughs and knows better.") These resemblances are close enough to suggest a filmmaker all too aware of his own legacy. On the other hand, there is no way that Hooper could have known in 1977 that he would, several decades later, be chosen to make another film about a voracious Nile crocodile on the loose (including within it a second retelling of the Joe Ball story). Far from being fixed, Hooper's legacy, it would seem, was still in the process of being secured.

The dingy, dilapidated Starlight Motel which loner Judd keeps more or less ticking over is itself caught between an immovable past and an uncertain future. While the different people who come to stay in this establishment intend only to be passing through, the Starlight, located in swampland beyond the margins of a small Texan town, is a sort of twilight zone - where the faded furnishings appear to be from another era, where everything seems shrouded in perpetual darkness and fog, and where the mysterious malfunction of a guest's watch reflects the way that time itself appears to have become stuck. Judd's wooden leg - the real one is said to have been devoured long ago by the pet crocodile he houses and feeds in an adjacent pool - is the signifier of a man scarred by history and going nowhere fast, as are his obscure (yet fixated) mutterings about past abuse. His awkward gentility, not to mention his voyeurism and murderousness, suggests that the Starlight forms part of an interstate franchise with the Bates Motel. Yet all the kudzu, country music and constant croaking of frogs point to a mode of heady southern gothic evocative less of Psycho (1960) than of Night of the Hunter (1995) - especially in the scenes where Judd is shown playing a menacing game of cat and croc with the little girl Angie (Kyle Richards) in a cobweb-filled crawlspace. The heavy stylisation of the sets, both interior and exterior, is only enhanced by Hooper's choice to shoot everything on Hollywood sound stages. Eaten Alive may be rooted in its strong sense of place, and in the culturally specific manners and mores of rural East Texas, but nonetheless its locations are entirely constructed, and lit in sickly reds and blues whose very artifice adds to the film's jarring mood of discomfort and anxiety.

With a scythe as his eventual weapon of choice, the mentally disturbed Judd - along with the monstrous reptile in his backyard - comes to embody death itself for so many of his transient guests (one of whom, played by Mel Ferrer, is in fact terminally ill). There are, however, other threats to the wellbeing of these characters. "Name's Buck, and I'm rarin' to fuck!" is the film's opening line, delivered by Robert Englund in an early onscreen appearance many years before he would become the iconic bogeyman Freddy Krueger in the Nightmare on Elm Street series, or appear in Hooper's own later Night Terrors (1993) and The Mangler (1995). The line itself, complete with its rapey associations, would gain something of an afterlife in Kill Bill: Vol. 1 (2003).

Englund plays bad ol' boy Buck, who is, in this opening sequence, determined to take novice prostitute Clara (Roberta Collins) from behind, and unwilling to heed her increasingly desperate protests. "There ain't no such word as no, you understand," he insists as he attempts to rape her - and the ensuing fracas sees Clara thrown out onto the street by the brothel madam, Miss Hatty (Carolyn Jones), which is what will lead Clara to the Starlight and ultimately onto the end of the deranged Judd's fork - and into his pet's jaws. Even little Angie's father Roy (William Finley), bickering with his wife Faye (Burns), adopts a posture of clench-fisted aggression as he stands over her on the hotel bed - a posture that Judd will soon be repeating over Faye, now bound and gagged on the same bed. It is as though Judd merely takes these men's violent objectifications of women to their logical, genre-driven extreme. Not that the male characters fare much better here, also falling victim one after the other to Judd's irrational acts.

"There ain't nothing nobody can do, nothing, it's all according to the instincts," Judd says of his crocodile after it kills and devours Angie's curious pooch Snoop - but he might just as well be talking about the very bestial impulses and predatory viciousness that drive his own behaviour. Hooper's film, despite its apparent focus on zoology, is really an experiment in baroque Texpressionism, dominated by concerns of an anthropological, ethnographic nature. For Eaten Alive is a nightmarish vision of carnal consumption, where the apex of the food chain just happens to be occupied by an ancient 'dragon'.

Eaten Alive will be screening at the BFI Southbank on 21 and 24 May, 2015, as part of that month's 'Southern Discomfort' season in Michael Blyth's Cult programme
at 17:10