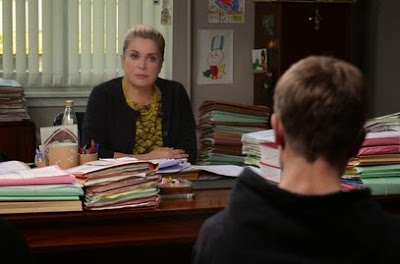 With such a different, unlikely choice for their opening film, it is as if the Cannes Film Festival wanted to send a message for the 2015 edition. After years of starry, mostly Hollywood outings with various degrees of critical reception (see the justified mauling of last year's unintentional comedy Grace of Monaco) and criticism for the lack of female directors in the official selection, they have given us the polar opposite of the previous years with La Tête Haute, a tough social drama directed by a woman, Emmanuelle Bercot.

In La Tête Haute, we first meet Malony (Rod Paradot) as a child in the startling opening scene on his first (of many to come) referral in front of juvenile judge Florence Blacque (Catherine Deneuve), with his concerned but clearly overwhelmed and immature mother Séverine (Sara Forestier). Nearly ten years later and now a teenager he is back in front of the judge having stolen a car and gone on a joyride, with a bleak future ahead of him.

After the blistering first thirty minutes spent almost entirely in the office of the judge, the film has Malony being sent to a youth rehabilation centre in the country for a six months stint, where she meets the daughter of one of the staff members, boyish Tess (Diane Rouxel)... Romance ensues but if you thought the film was going offering a resolution and a happy future too soon, it is a case of one step forward, two steps back as Malony squanders the opportunities that are offered to him. And this is one of the great strengths of the films: while there is an feeling of hopelessness pervading throughout, the director knows better than solely blame society. In fact, while not blind to the difficulties encountered, she has a typically French belief in social structures.

Yes Malony grew up in an unforgiving environment, but a loving one, with a well-meaning but immature mother doing the best she could, and he is given chances after chances to make something out of his life, which he comprehensively ruins, and the theme of social responsibility runs through. And Emannuelle Bercot asks the question: what do you do, what hope is there with somebody who, while seemingly smart, is unable to integrate into society, due to his inability to concentrate and terrible fits of violence.

Emmanuelle Bertot mostly avoid social drama caricature, even if a few scenes are very close but then again she is not timid and make some bold directing choices, which explains why at times she misses the mark. But when she does, it pay off big time, with several moving scenes, and I've already read some comparing La Tête Haute to Mommy, with the teenage tearaway/mom relationship, although the former lacks the raw power of the latter. 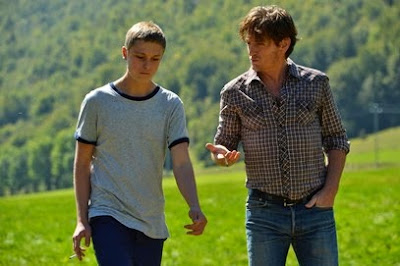 If there is one criticism however, while director finds a personal voice within the realm of social realism, from a narrative point of view the film does not really add anything particularly original to its subject, and the film becomes at times a little predictable, especially in his second half.

Catherine Deneuve in it is as brilliant as she has ever been in years. She has become so iconic that she often ends up playing a variation of herself (and I did wonder if the Schubert's Trio in E-Flat we hear a few times is a nod to one of her most iconic parts in The Hunger or this is just a coincidence?). But here she has a real part to play, one which she handles with finesse and a winning subtlety. There are no histrionics, no over-acting, but at once a terrifying natural authority (and you do not want to be told off by her!) other times a moving, caring presence, culminating in the understated scene of a simple hug.

As Malony, Rod Paradot brings a wonderful presence and naturalism to the part (at times it feels as if his character is what the child from Lil' Quinquin will become when he grows up!), holding his own against his illustrious cast, with a certain wit but also the sudden bursts of rage and violence he so struggles to control.

Official Selection, out of competition