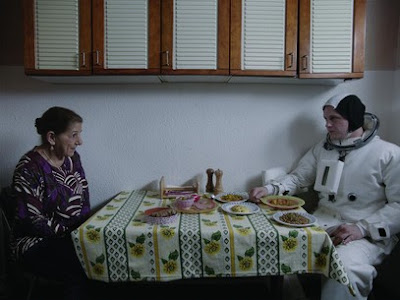 The theme of urban loneliness used to be a recurring trope in indie cinema in the 90's, and was often the scourge of film festivals at the time, with audiences having to sit through yet another ensemble films filled with quirky characters, in a we are all at one with each other, yet we are so far from each other kind of way. So that Asphalte was tackling such a theme, and with a comedic angle, was filling me with a dread, despite the starry cast. Yet how wrong I was...


Asphalte is split into three different stories only connected by the same setting: a bleak council estate in the outskirts of Paris. In a first segment, John McKenzie, an astronaut (Michael Pitt) lands on the roof of the estate on an emergency shelter, and finds refuge with an elderly woman, Madame Hamida (Tassadit Mandi), while waiting to be picked up by NASA. In the second segment, Jeanne (Isabelle Huppert), a lonely and forgotten actress, strikes an unlikely friendship with her teenage neighbour Charly (Jules Benchetrit). In the final segment, a hospital nurse (Valeria Bruni-Tedeschi) has a chance encounter with a disabled man (Gustave Kervern) whom, due to a misunderstanding, the believes to be a famous photographer.

Asphalte is quite simply a gem. Despite the well worn trope and unlikely premises, it finds a winning balance of laughs and bittersweet tenderness. Director Samuel Benchetrit is above all a writer, and it shows, thanks to a very precise script. However, he does not fall into the trap of wordiness that so many writers turned directors might, and let his film some space to breathe, with moments of silence and quiet observation. And while he includes some touches of almost surreal humour, they never threaten to derail the film. 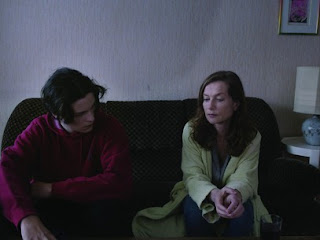 As for the unlikely pairing between all these characters, they work, against all odds, without feeling forced. Each segment has a duet of characters from widely different walks of life, and Asphalte depicts how an unexpected connection can happen during a fleeting moment, and it's wonderful, be it the motherly care of Madame Hamida (whose sad back story slowly emerges) and John, the inter-generational support between Charly and Jeanne, or the flicker of romance between the nurse and the photographer.

Isabelle Huppert plays a variation of herself and what she could have become, had her career fizzled out early, and is so moving whole still keeping her dignity and not fishing for sympathy. Valeria Bruni-Tedeschi, who went through a phase of almost cartoon-esque characters in her early career, here is all in subtlety and melancholy. But Tassadit Mandi as Madame Hassadit, is the real knock-out in here, with her heart of gold and quiet underlying sadness.