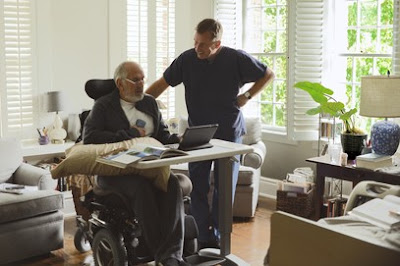 Chronic feels a bit like those with zero interest in cinema imagine a film presented at a film festival to be: dour, slow, overlong, provocative, abrasive, featuring badly lit naked bodies and bodily fluids, and with an eager willingness to shock. And yes, all of these staples of a certain kind of arthouse cinema feature, which made for a rude experience for many wary film critics on an early morning press screening near the end of the festival. But Chronic is so much more than that.

In Chronic, David is a palliative care nurse whose most recent patient is about to die as the film opens. We know nothing about him, and the film throws a few red herrings about his personality and his past, as we see him attend his latest patient's funeral, or confide to a stranger in a bar that his wife died recently, only for the audience to realise he is actually lying to a certain degree. There are no clues about his private life past or present, or any kind of life outside his occupation. In fact, we see him actively seek more night shifts and swapping some with a colleague, which hint at a lack of any outside activity in his life.


And as he switches from patient to patient, his diligent almost takes a sinister turn from an external point of view, as his close contact with an elderly and difficult patient triggers a knee jerk reaction with his family, even though they were more than happy to dump him on David at first. And we understand that perhaps David needs his patients even more than they need him, a bleak reflection on the nature of selflessness.

Miguel Franco's direction is at times confrontational, all in dull, medical lights and harsh realism, which might prompt some reviewers to call him out as a sub-Haneke. But he mostly eschews any overly dramatic visual trope, and none of the few disturbing scenes feel gratuitous. But Chronic's biggest strength of Chronic however, is its script, also written by Michel Franco, a masterful character study that patiently unravels layer after layer of a complex man to brush its portrayal.

Tim Roth as David is just as good as he has ever been, the perfect incarnation of such an intriguing man. Never fishing for sympathy but compelling enough to make us care (and we find out about some inappropriate behaviour of his in the past), his is a multi-layered, flawed human being that leaves its audience pondering long after the end credits have rolled, his unhealthy obsession about helping his patients one of the clues of a broken life.

If there is one ambivalent note in Chronic, it is its rather shocking ending, considering the skill and subtlety of what came before it. It is one that will jolt audiences and split them right in the middle. While wide commercial appeal is probably limited, Chronic is guaranteed to have its niche audience talking, and I wouldn't be surprised if Tim Roth walks away with an acting nod comes Sunday.

Chronic was presented in the Official Selection, in Competition.