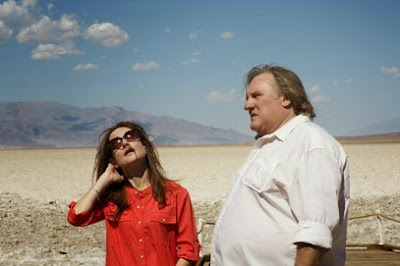 It has been a while since Gérard Depardieu has been making the headlines for a film he was involved in as opposed to his personal life, so after his towering return to form in Welcome to New York last year (which was rejected by every selection of the Cannes Film Festival however!), he is back on the Croisette for Valley of Love. This new film has an intriguing premise: divorced couple Gérard (Gérard Depardieu) and Isabelle (Isabelle Huppert) travel to Death Valley after receiving some posthumous letters from their recently deceased son with some specific instructions and a promise they would see him there.


Valley of Love starts off rather promisingly. For any cinephile, the pairing of Isabelle Huppert and Gérard Depardieu, reunited on the big screen after all these years is an exciting prospect, with their last film together prior to this being Loulou (1983). They have an obvious mutual respect and admiration for each other on screen and a natural acting chemistry. And the premise is suitably intriguing, with its Twilight Zone vibe, an unusual departure for modern mainstream French cinema that still shies away from genre cinema generally.

But sadly problems start soon enough. Having the two French stars playing actors with their own first names is a meta touch that does not actually add much to the story. And having Gérard mourning a son left too soon is rather tasteless, considering how his own son Guillaume passed away in his thirties. He is made to overplay his own perceived real life personality, and I am not sure how we are supposed to take the fact that he behaves a bit like an idiot with an American fan (or that Isabelle Huppert herself is like an ice queen with him and his wife, again an image she usually conveys to the public). Being reminded so often of their real selves feels very distracting, and it diminishes the emotional connection to the story. Interestingly, Isabelle Huppert also plays an actress in an another film in the official selection in Cannes this year (Asphalte), except that this film had her play with her own image in a much more satisfying way. Worst, both actors are poorly directed here, with a particularly annoying cinema verité style of acting that feels supremely artificial, and more grating as it goes along.

As for the mystical element, it feels flat and ends up being just a contrived plot device for most of the film, that is poorly explored apart from a couple of "reason against faith" Mulder & Scully types of conversations that go nowhere.

The film has a couple of redeeming features. When the dialogues turns to the difficult relationship they had with their son, their grief and their own issues as a former couple, we get a glimpse of what the film could have been if a bit more focused.

However, the film ends with a particularly tasteless and horrible conclusion that truly is the final nail on the coffin. A weird mismatch that gets incredibly more unconvincing as it goes along, Valley of Love is a terrible disappointment and a waste of these acting legends' talent.

Valley of Love was presented in the official selection in the Cannes Film Festival, and is in competition.