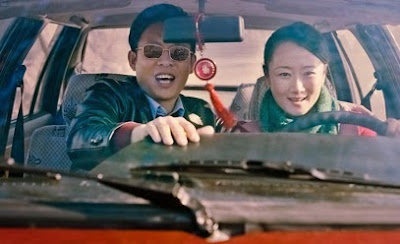 Having been noticed with such films as Still Life (2006) and 24 City (2008), Chinese director Jia Zangke made a real impact with his previous film, A Touch of Sin (2013), which tackled corruption and violence in modern China, and won a prize for best screenplay in Cannes. And he is back on the Croisette this year with the poetically named Mountains May Depart.

Mountains May Depart is set in three different time periods. We first meet childhood friends Tao (Zhao Tao), Zhang (Zhang Jinsheng) and Liangzi (Liang Jin Dong) in 1999 while in their mid twenties. The trio first appears to be friends, but love rivalry soon emerges, leading to jealousy and even violence. And Zhao is having to choose between her two suitors, the former an ambitious entrepreneur and the latter a miner. Fast forward to 2014 (the Malaysia Airlines is mentioned as if to anchor this part in the present even more) and a lot have changed, relationships have ended, characters have moved on (or not)... Then we skip to 2025, a period during which the repercussions of the character's life choices are now felt by the next generation.


The biggest strength of Mountains May Depart is the way the Chinese director tackles some rather familiar themes but thanks to his inspired direction and script make them appear fresh. We have seen this kind of love triangle may times before, but here we follow the characters through the years and really feel the consequences of their actions on their lives as decades go by. And there is a great elliptic quality to the script, which will happily skip seemingly important events that other films might have wasted precious minutes to go through, and only use the important social of economical events of Chinese history that took place over the last 15 years sparingly, more interested than he is in the fine details of lives of his characters rather than offering us a sprawling and more conventional saga.

The joyful candour of youth and hopes for the future are evoked, only to be replaced by bittersweet disappointment and melancholy as years have gone by, as life never quite turns out the way you expect it to when you are young, even when it feels seemingly on track. This second part of the film is its most moving, as acceptance and pragmatism have taken over romanticism, and the big and small life tragedies have taken their toll.

Sadly, as we jump forward to 2025 and follow Tao's son, who now lives in Melbourne with his dad, not remembering his mother, the film lose its way spectacularly. The dialogues become clunky (and elicited a few uncharitable but well deserved sniggering laughs in the Cannes audience I saw it with, with the line "Google Translate is my dad" being a highlight), and the plot developments contrived. Plus there is not a great feeling of connection with the previous events, making it appear almost superfluous.  Jia Zangke wants to portray the difficulty of communicating values and cultural heritage through future generations in a world dominated by globalisation, and how blood ties remain strong, but his lightness of touch deserts him in this third act, and it feels like we are watching a different film altogether. At least Mountains May Depart somehow recovers in its moving closing scene, with echoes the opening one in a very original and affecting "circle of life" kind of way, with the unlikely use of the Pet Shop Boys' Go West working wonders.

The film's shining light truly is its female lead Zao Thao. If the best actress prize was not for Cate Blanchett to take this year, I would not be surprised to see her walk with the prize come Sunday. From the wide-eyed innocence of youth to the quiet acceptance and loneliness of her more mature years, she is quiet simply fantastic.

Mountains May Depart was screened in the Official Selection at the Cannes Film Festival, and is in competition.