In a rather unfortunate chain of events, three directors that we were expected in competition this year in Cannes, have found themselves relegated to Un Certain Regard: Brillante Mendoza, Naomi Kawase and, more surprisingly, former Palme d'or winner Apichatpong Weerasethakul, which made the audience wonder if there was less to expect from the latest of the Thai director.

In Cemetery of Splendour, an elderly woman, Jenjira (Jenjira Pongpas) offers her assistance to a military hospital in the Northern Thai countryside, where soldiers are stuck by a mysterious sleeping illness. She strikes an unlikely friendship with one of them, Itt, (Banlop Lomnoi), while a psychic claims to be able to unravel the curse.


Cemetery of Splendour might come across as a minor outing from Apichatpong Weerasethakul at first glance. It is certainly a more gentle viewing experience than his previous work: the pace is more languid, the tone more serene and the story more approachable and straight-forward. That does not mean that the director has abandoned all his quirks, and the film is imbued with local mysticism. There are vengeful spirits, nymphs (who appear in a very matter of fact way is a very funny scene), and a flying jellyfish, not to mention a mysterious and masterful centrepiece that plays out like a dream, and set in a cinema where the audience seem to be daydreaming. Visually, even if more restrained, the film is still a treat, with a gorgeous general aesthetic (I'm thinking of the very striking, colour changing fluorescent sleeping lamps in the hospital at night. 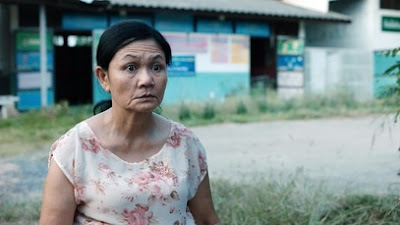 There certainly is a discrete but none the less committed underlying political message about the current situation in Thailand, where dissident voices and freedom of speech are at risk. But above all, Cemetery of Splendour is the beautiful, sensitive portrayal of an older woman, whom we believe to be lonely at first, only to realise that she has an American husband (leading to a few amusing scenes of miscommunication). And Jenjira Pongpas, who has been in every film of Apichatpong Weerasethakul despite having no acting training, delivers yet again a wonderfully natural performance. There is a very funny scene during which two young women reveal themselves as being nymph to her, to which she responds with a subtly shocked look, bringing her food slowly closer to her.

She keeps the film firmly grounded, and yet Cemetery of Splendour is still as beautifully hypnotic and beguiling as anything the director has done, even if easier to follow. This latest outing of Apichatpong Weerasethakul certainly deserved a slot in competition.

Cemetery of Splendour was presented in the Official Selection, in the Un Certain Regard section