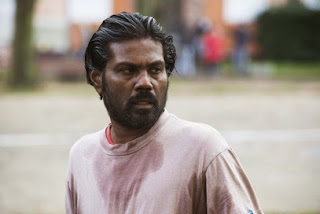 Just like I was saying on yesterday's post, Cannes awards are even more unpredictable than the Oscars, because of the way they are selected by a jury made of up to nine people at the most, as opposed to a whole academy. And since the jury members are all artists, that often yields some very different results than if the awards were chosen by critics. Indeed the Coen brothers made some snarky comments claiming these were not critic's awards, all the most surprising considering their choices were mostly (bar one very surprising pick!) the critic's favourites!

While I was hoping to see The Lobster higher on the list, I am grateful for this award still. This award is traditionally offered to a film that has not fully seduced the whole of the jury, but that is passionately defended by some, and while The Lobster was generally well received, it is probably too odd to be consensual. I can see it doing well particularly in Britain thanks to a deadpan, dark sense of humour and great cast. As for the Greek director, he as improved in every way with this film, and this is the logical continuation of a very promising career.

He was the favourite, and delivered a very touching (if slightly rambling) speech on stage, this being the first acting prize he has ever received despite a career spanning several decades. I would have happily seen Tim Roth pick up this award for Chronic, but his part was probably too unsympathetic.

I am not quite sure what went on with the jury, but giving a joint award prize but only to half of the wonderful Carol duet is a big slap on the face of Cate Blanchett, who is absolutely incredible in the Todd Haynes film, with a performance nearly on par with Blue Jasmine. Perhaps they felt that she did not need another acting prize after her two Oscars? Still, a well deserved prize for Rooney Mara who more than holds her own against La Blanchett, a part all in restraint and underlying emotional power, with glances from her sad blue eyes speaking volumes. As for Emmanuelle Bercot, if there was a prize for most rambling acceptance speech, she would have won that one too!

Chronic divided the critics, with many seeing it as subpar Michael Haneke, with its bleak outlook and shocking scenes. I enjoyed it more than most although I am surprised by its award as its script is probably its least remarkable aspect, whereas the acting of the directing would have felt more appropriate.

While to me this towering work of art deserved the top prize without doubt, deep inside I suspected this might not happen as this is a film that some deem too challenging. All the same, a directing prize is better than nothing, and completely deserved, with some of the most inspired and delicate direction I have ever seen, each frame lovingly composed without ever feeling forced, and such a subtle way of evoking emotions through long, slow tales and few dialogues.

One of my best films of the official selection, which I admire with some minor reservations, this first film of Hungarian director László Nemer would have made a ballsy Palme d'Or (and jury member Rossy de Palma claimed before the ceremony they had made some bold choices). Still, what a remarkable achievement and deserved runner-up award, an intense and immersive film like nothing I have experienced before, which heralds and exciting new voice in world cinema.

The only real surprise of the awards came for the top prize, that few predicted. I have to shamefully admit to having missed it, as, with half of festival, I was attending the midnight screening of Love the night before (which started at 1am) and did not wake up for the 830am press screening of Dheepan. I have never been really on board with Jacques Audiard's work, one that I respect rather than love, and by all accounts this is not his best. There were talks of this top prize rewarding a career more than a film, but that only happens at the Oscars, not Cannes. The Coen brothers claim there was a lot of enthusiasm from the jury for this film, but reading between the lines I get the impression they could not agree on one film, which meant they went for a film all of them have liked, even if it probably was nobody's favourite.

While the Coen brothers looked suitably gloomy on the closing ceremony and the press conference that ensued, it seems that the jury members really got on this year, and there were talks of how this experience has changed their lives, with a real enthusiasm shining through. Sienna Miller gushed over Son of Saul, Rossy de Palma claimed she made love to cinema every day... Many predicted a disappointment because of the presumed lack of cinephilia of this eclectic jury, but they did well, mostly, rewarding some of the most deserving films.