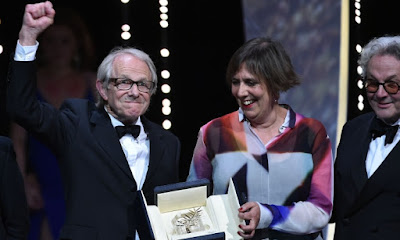 By all accounts, this has been the strongest edition of the Cannes Film Festival in well over the decade, the official selection in particular, and there were fears that the jury might not deliver the awards that would do it justice jury members being particularly fickle. Few of us could have imagined how wrong this George Miller led jury was about to be however, crowning of the best edition with some of the most misguided awards in history.

First of all, I must specify that this bitter disappointment is not due to the arrogant belief that only I know which films deserved some awards, my tastes are quite unusual at the best of times, and as much as I loved Park Chan-wook's The Handmaiden, my favourite of the festival, I never expected it to win the favours of such a diverse jury (I had wrongly hoped for a directing nod however). Rather I am judging these results within the context of the festival's history, and what constitute some "good", worthy winners. And considering the savage response from critics to these results, I am far from alone.


This jury, like many before them, have falling victim to the tyranny of "issue" cinema. And they have, with a few notable exceptions, awarded films that bring absolutely nothing to cinema as an art form, and instead hammer down their point with little flair and subtlety. As well meaning as Ken Loach is, there was literally no value to give him a second Palme d'or at this stage in his career, for a fairly average film that is more a political tract than anything else, and this top award is unlikely to bring him a new audience. The ideal Palme d'or is one that pushes the boundaries of cinema, and finds the difficult balance between critical and commercial success, the sort of films that will remain in the annals of cinema, but it is fair to say that it is unlikely to happen to I, Michael Blake.

Giving two prizes to moderately well received The Homesman (Best Actor and Best Script) was baffling considering how many films were worthy of a prize and went home empty-handed, a question that was put to George Miller at the press conference and one that he did not offer any kind of convincing answers to. Adam Driver in Paterson had been an early favourite but he, like the film, left with nothing.

Even more baffling was the Best Actress Award to Jaclyn Jose for Ma' Rosa. There are rarely been so many great female performances in the same year (Isabelle Huppert, Sonia Braga, Kristen Stewart, Sandra Hüller...) so it's beggars belief that they were all overlooked for what is little more than a supporting part, with respect to the Filipino actress (who seemed totally surprised herself to be winning). And Mads Mikkelsen's suspicious tan last night makes me wonder how many films the jury members actually did watch. The jury was particularly defensive when called out on this award tonight.

Awarding the jury prize to Andrea Arnold for American Honey was a nice touch, a film that had some fervent supporters (including myself!), but this is now her third jury prize, and considering how much of a step up the film is from her previous work, it deserved a higher accolade.

The most WTF prize of the evening however was for Xavier Dolan's It's Only The End Of The World. The former critical darling took a beating from many of his former supporters, in a ridiculous film in which he found himself out of his depth with a starry cast he was completely unable to direct, and which emphasised the limits of his cinema. His film was one of the worst reviewed of the selection, and what could have an opportunity for him to step back and learn from this failure has instead vindicated him because of this undeserved award. His childish and immature response to negative critics does not bode well for his future career either.

Olivier Assayas deserved his directing award for Personal Shopper, a film, which, while not entirely successful, at least tried to achieve something completely different, and one of the most unusual of the selection. He shared it with Cristian Mungiu for Bacalaureat, a solid film but far from his best, and which would have deserved an award for its script more than its rather bland direction.

And then there is the film that everybody expected, Toni Erdmann, the German comedy that came out of nowhere and took the festival by storm. It would have made such a handsome Palme d'or, the discovery of a new talent for a film unlike anything I have seen before, that would have had a very real commercial prospect while garnering a great critical response (and from the audience at its gala screening). It seems as if everybody in Cannes had a level of love for this film expect the nine members of the jury. Besides, if the jury wanted to push for a political statement, Toni Erdmann has actually a lot more to say about globalisation and capitalism than I, Daniel Blake, in a subtler and more original way, as Les Cahiers du Cinema pointed out.

Jury members also tried to play the critics versus audiences card at the press conference last night, but this argument does not work at all this year, as the films that had generated the most enthusiasm with critics AND audiences alike did not win anything, whereas they mostly went for average films that are unlikely to generate much enthusiasm with the audience.

Since 1997, at Isabelle Adjani's request, jury members have been exclusively artists, the idea behind it being that they were less likely to make some elitist, dry choices unlike critics, but this does not seem to be paying off, in fact, lacking of real cinephile knowledge they often seem to hide behind "important" films (or their idea of what they are). André Téchiné, member of the jury in 1999, spoke about this issue at length back then. After the Dheepan's undeserved win last year and now this, maybe the time has come to review the jury composition and selection.