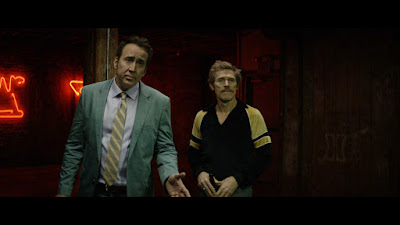 Sometimes, film directors with the most uneven, unpredictable careers are the most interesting ones, against those with a more calculated ones, and Paul Schrader firmly belongs in the former camp. Having written some of the best films of the 70's and 80's (Raging Bull, Taxi Driver...) his director career has many highs (American Gigolo, Cat People, Mishima...) and many lows (Light of Day, Patty Hearst, the awful Exorcist sequel Dominion...). His previous film, The Canyons (with James Deen and Lindsay Lohan), was widely panned by the critics even though I find it rather fascinating. He is back with Dog Eat Dog and a rather starry cast: Willem Defoe, Nicolas Cage...) which was presented as the closing film of the Director's Fortnight strand in Cannes.


Paul Schrader came on stage to introduce the film at the closing ceremony, and told us to "have some fun". If only...

In Dog Eat Dog, three ex-cons are offered a dodgy job by the Mexican mob, the kidnapping of a baby, with the view of blackmailing his father. It all goes terribly, predictably wrong, when the men kill an intruder who turns out to be the father of the baby, and the man the mob intended to blackmail! They then find themselves on the run from just about everybody.

After a couple of difficult experiences from his own account, Paul Schrader wanted the freedom to have some fun. The film is filled with some of his trademarks directing flourishes, with garish colours, hallucinatory perspective reflecting the state of mind of his substance abusing leads, and violence. The main problem is what could have ended as a fine piece of neo-noir with a dollop of trashy, dark humour ends up like one of those sub-Tarantino ersatzes of the 90's, made by directors who believe than mixing gritty violence, gangster and knowing humour was all that was needed, and frankly you would expect more from Paul Schrader.

The opening is particularly heinous and unfunny. Willem Defoe, high as a kite and trapped in a suburban fuchsia hell proceeds to murder his partner and her teenage daughter, a scene which sadly sets the (misguided) tone for the rest of the film, missing of any wit or value to make it palatable. Interestingly the film ends with the double assassination of the innocent, secondary characters which we had been briefly allowed to invest into emotionally, as if the film was truly giving us the middle finger.

The baby kidnapping plot has echoes of Raising Arizona by the Coens brother, a comparison that does Dog Eat Dog no favour, a film that showed how can you combine absurd humour in a neo noir setting when you have the talent for it. The female objectification and dark humour might be supposed to be a voluntary dig at our more PC culture, but descending to the level of 4Chan keyboard warriors living in their mum's basement is not exactly where cinema should be going right now. Dog Eat Dog tries to be subversive, it ends up being just tedious and often boring, for all its histrionics.

Some might argue Dog Eat Dog places a mirror in front of a society which may well elect Donald Trump as its next president comes November, the problem is it does not have anything particularly interesting to say in the process.

Willem Defoe is allowed to go unhinged and I miss the days of his Wild At Heart performance. Nicolas Cage plays it relatively straight in comparison, and is the saving grace of the film, the only character with a remain of dignity and warmth.

A misguided mess that is often dull and unpleasant, Dog Eat Dog marks a new low in Paul Scharder's career.

Dog Eat Dog was the closing film of the Director's Fortnight strand.