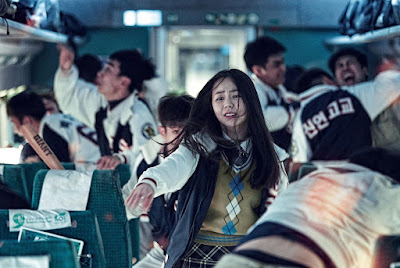 In Train To Busan, a busy businessman, Sok-Woo (Yoo Gong), takes an early morning train from Seoul to Busan with his young daughter Soo-Ahn (Kim Soo-ahn), to take her to his estranged wife. As the journey begins, a mysterious virus outbreak spreads through the country, turning its population into mindless, flesh eating monsters, and infecting the passengers too. The survivors have to fight to make it until the train reaches Busan, which has been spared so far.

It is a bit of unfair stereotype among those who do not know much about cinema that the Cannes Film Festival is all about the most boring and/or experimental "foreign" films, but far from it. Genre cinema often finds its place in the line-up, and there is even a Midnight Screening sections for those violent/naughty films that cannot be shown earlier in the day.


Train To Busan belongs to the sub-genre of disaster horror films, such as Snakes on a Plane and Flight of the Living Dead, films in which the threat is two-fold, usually involving a confined environment and a deadly foe. While recent disaster films have become increasingly boring and filled with tedious CGI set pieces (2012, San Andreas), disaster horror films have a more direct connection to the heydays of disaster cinema, the 70's, referencing their tropes, especially in the characterisation.

This is the case in here, as many characters seem to have come straight from the Airport franchise and its imitators: the selfish, ruthless businessman, the sport team, the little girl, the elderly women who show a lot of courage, the pregnant woman... Unlike what too often happens in horror films, we actually care for most of the characters in Train To Busan, ordinary people put in an unusual situation and having to find unexpected bravery. The director plays with our expectations as to who will die and in which order, who will sacrifice themselves to save others... and the film is often melodramatic and even sentimental, in a way that South Korean cinema can be at times, but it is part of its charm. 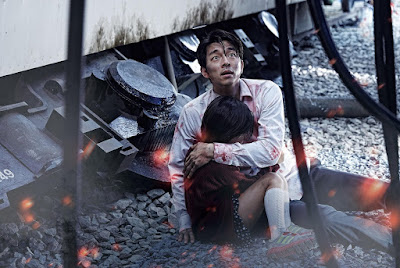 Train To Busan is fast-paced, energetic and mostly fun, if perhaps overlong, and its two hours running time could have been to by a good thirty minutes, as the middle section with infected attack scenes becomes a little repetitive. There are a couple of exciting set pieces of infected mayhem, especially in the first scenes of outbreak on the train, and a nice scene of rampage at a train station, but the film does lack some truly memorable moments however, there is no particularly original or even gory death (the horror is surprisingly tame), and while the premise is interesting, the audience soon gets the feeling of having seen it all before. The infected (not zombies, despite what the synopsis says), are the 28 Days Later variety, fast running, which keeps the action lively at least.

Its 70's disaster vibe gives Train To Busan a certain charm, otherwise it is mildly entertaining and utterly forgettable.