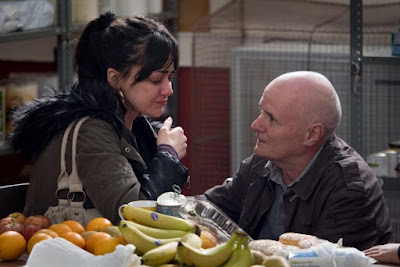 The unflappable Ken Loach, who is about to reach his 80th birthday, has tireless made some films supporting his political leanings, and there is so much to be angry about in the British society at the moment, so much injustice and inequality... Seen as a left-wing, out of touch radical during the Blair years, he has recently been vindicated with New Labour dying a good death, and Labour taking a shift to the left. In his new film, I, Daniel Blake, his target is the Tory government and particularly its workfare programme, which has purposed itself to put a lot of benefit claimants back to work, using some coarse, unfair methods in the process.

In I, Daniel Blake, Daniel Blake (Dave Johns) is a carpenter who, having suffered a heart attack, finds himself out of work and having to rely on benefits to survive, facing a complicated, Kafka-esque system in which benefit claimants are seen as skivers and liars. He befriends single-mum Katie (Hayley Squires), who has been relocated from London to Newcastle with her children, where she has no support system or even acquaintances, and who faces the same hardship and a baffling system.


You cannot blame Ken Loach for his intentions. His film is inspired by countless real stories about a broken system which seems more in place for scoring political points than serving its purpose. The British director is angry, and you cannot fail to be moved by the plight of his characters, especially considering that this is what some people in real life has to face. If only there was a bit more cinema in his film.

Indeed, considering his illustrious career and real qualities as a director, it is baffling how clumsy his latest offering is, making you wonder if his justified outrage has clouded his judgement. The set up feels laboured (pun intended) to begin with, it is as if Ken Loach has just stitched two storylines together to prove his point, and the friendship between Daniel and Hayley does not feel very believable. It does not help that the two leads, despite the talent of the actors portraying them, do not feel fully fledged characters either. Benefit claimants are being so demonised in British society at the moment (i.e. a repugnant reality TV programme called Benefits Street) that it is almost refreshing to see some being portrayed fairly, but it is a shame that they are so one-dimensional. 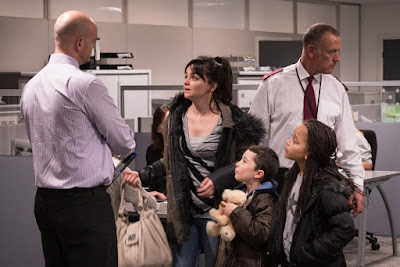 Daniel Blake epitomises blue collar workers left behind by a world of globalisation and technology that they do not understand. Several scenes see him struggle with the basic knowledge in I.T. required by the job center, but those feel terribly artificial. Hayley fares a little better, having to make some terrible decisions to feed her children and herself but she still come across as mostly one-note. At least she has one of the best, and most shocking scene in the whole film, set in a food bank. For a brief moment, the director comes up with an idea of cinema, one that works, and makes you wish there were more like those throughout the film. Social realism does not need any snazzy camera angles to qualify as cinema, but I am thinking of such masterpieces as The Dream Life of Angels, films that show you can go down the ultra realist route and still make some proper cinema.

Ken Loach's intentions are admirable but I, Daniel Blake is far too "show and tell", which is all the more disappointing considering how important his subject is.