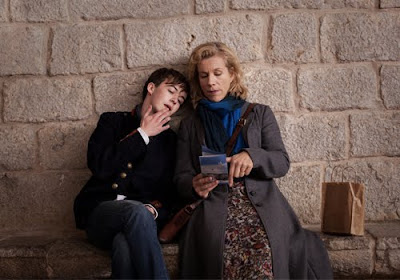 Andrew Steggall’s debut feature Departure ambitiously attempts to tell a story of coming of age and sexual awakening within the picturesque setting of the beautiful French countryside. It deals with themes of teenage rebellion, sexual frustration and parental disobedience. The film tells the story of 15 year old Elliot (Alex Lawther) and his mother Beatrice (Juliet Stevenson) who arrive in the middle of the night at their holiday home in a small Languedoc village after a long drive from England. We soon realise that this is no ordinary holiday, and that they are in fact here to pack up their beautiful summer home in order to sell it.


From the offset, it is evident that Elliot and Beatrice’s relationship is fraught. Beatrice is exasperated by Elliot’s inability to open up to her; as he finds solace in a new friendship in the shape of handsome Clément (Phénix Brossard), Elliot becomes more and more detached from his mother. The presence of Clément in both their lives is a welcome distraction from the gloomy atmosphere in the house. As Elliot becomes increasingly attached to his new friend and cruel towards his mother; his morbid fascination with death and suicide leads to him seeking solace in a fantasy world where he doesn’t have to deal with the harsh reality of a crumbling family unit.

The setting allows for a beautiful dream-like narrative, aided by Brian Fawcett’s stunning cinematography which manages to not only depict the beauty of the countryside, but also a very authentic representation of small village life, and the loneliness that comes with living in isolation. However, the film falls short of a convincing narrative, which makes the sometimes exasperatingly clichéd content feel a bit jarring.

Elliot’s pseudo-intellectual spiel as a young tortured poet is a genuine representation of the arrogance and precociousness of a teenager who is older than his years, while Clément’s apparent laissez-faire attitude is in complete contrast. Clément’s Parisian abruptness compared to Elliot’s middle class intellectual airs and graces makes for a rather charming dynamic between the two. Lawther’s turn as a self professed tortured artist is very knowing and at times almost comedic.

Juliet Stevenson’s brilliant performance as a woman facing a major trauma in her marriage is sadly let down by a messy script, which at times doesn’t seem to know what exactly it is trying to convey. This flaw makes some of the more claustrophobic scenes seem laboured and a tad predictable. Departure is a film which asks way too much from its audience, yet it fails to deliver the outcome it is building towards. It is however important to highlight that there are moments of utter brilliance in some of the dreamlike sequences as well as a huge enjoyment gained from watching the playful interactions between the two boys.

In the whole Departure is a commendable debut from an ambitious filmmaker who has managed to put a genuinely fresh spin on the well-worn out genre of coming-of-age LGBT movies. This almost makes up for the weaker elements in the script and dialogue. Not a perfect film, but a great potential for a young writer/director who has shown some real auteurial nous.