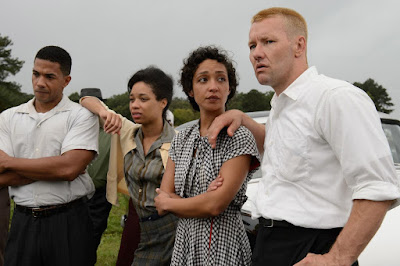 Loving is based on the true story of Richard and Mildred Loving, an American interracial couple in the 50's, at a time when some states still banned mixed races weddings, faced with the prospect of living their marriage away from those they loved and the place they called home.

Loving is a great film as much for what it is as for what it is not. You could be forgiven for approaching the premise with caution. So many mediocre directors hide behind a worthy subject to offer dour, melodramatic films with no personality and not an ounce of cinema. "Important" Award baits are often guilty of that too. Yet director Jeff Nichols has not put a foot wrong so far with his young career, and Loving is no exception. This might sound like a more classical territory for him, but such is the mark of a great director that he makes it completely his own. Talking about the film at the press conference today, he made it clear that he did not want to make a courtroom drama. So do not expect a bombastic soundtrack, big shouty acting, tear-jerking scenes... Instead, the Midnight Special director delivers a film spared down to the absolute minimum, yet such are his confidence and talent that every scene and every meaningful moment count.


He is more interested in telling a love story, hence the title Loving (which is also the couple's surname). And the whole film is kept firmly at human scale. The first act, hauntingly beautiful, evokes the loving first steps in Richard and Mildred's union in a few discrete scenes: the first pregnancy, the intimate wedding...  Only then do we understand that such a wedding is not legal in Virginia, and they find themselves in jail, waiting to be judged for their crime. But there is no screaming, no emotional explosions, no stereotypical prison wardens shouting abuse, all is evoked through minimal yet so very affecting acting.

Given the choice to spend some real time in jail or leave the state for 25 years, they are forced to move to D.C.. leaving their family and countryside livelihood behind. Again, those scenes are restrained, and unlike what a more melodramatic film would have shown, the Lovings make do with their new life, the years pass, more children are born... even if the regrets and the feeling of injustice stay with them throughout. It is almost through a coincidence that they set a chain of events in motion that would make America's history. Not that you would know it however, as the story is firmly kept at human scale, we are mercifully spared long, tedious courtroom scenes, and the director is more interested in the relationship of the couple.

Jeff Nichols has such a talent for filming everyday American lives, he does not overdo the period details, working class people here are portrayed with dignity and truthfulness yet again, as with his previous films. He also beautifully captures the visual essence of American small towns. 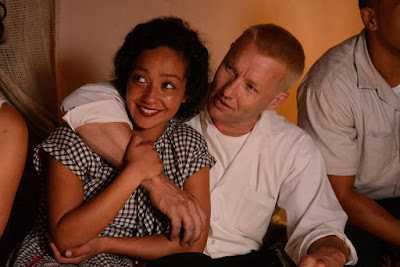 Ruth Negga is quite simply phenomenal in this. She makes the most of spare dialogues through a beautifully understated yet terribly affecting performance, in which her face and especially her eyes convey so much, the fear, the affection... Joel Edgerton is also excellent, as a simple man completely overwhelmed by the events around him, wary of the press and sudden attention, and fearful of anything that might jeopardise his and his wife's fragile happiness. Together they form such a great couple, with a quiet but strong bonding, as an audience, we are made to appreciate the love they have through each other not through words or passionate outbreaks, but through small acts of kindness and attention for each other throughout the years, their body language also expressing so much.

Indeed, more than anything, Loving is a love story, and the last few minutes, as the final words of the epilogue come on screen, will break you. Of course, the director still does not forget the importance this case had for America's social rights, and this is expressed simply but wonderfully by Mildred Loving as she considers how their case might help other people too. The hype machine has already begun after this morning's press screening, with talks of Oscars... Do not let that put you off however, Loving is so much better than those terrible issue films, and marks the confirmation of Jeff Nichols as one of the most gifted young directors.

Loving was presented in the Official Selection, in competition.