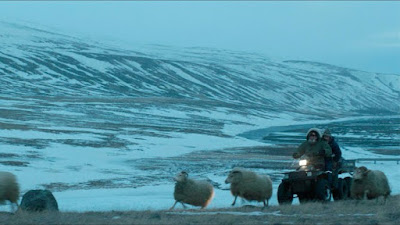 Grímur Hákonarson's bone-dry comedy drama, now available on DVD and Blu-ray from Soda Pictures, introduces us to rival Icelandic sheep farmers Gummi (Sigurður Sigurjónsson) and Kiddi (Theodór Júlíusson). The pair are feuding brothers whose lands lie adjacent and who nevertheless haven't spoken to one another for 40 years, relying on Somi the sheepdog to deliver messages back and forth - and only when absolutely necessary. The exact cause of their quarrel is obscured by the mists of time, although elder brother Kiddi, a temperamental alcoholic, appears to nurture a grievance about their long-dead father's decision to entrust Gummi with the family pastures rather than himself.


Turmoil arrives to disrupt this unhappy but stable status quo when Kiddi's prizewinning ram is diagnosed with scrapie, a highly infectious degenerative disease. Kiddi is devastated to learn that his entire flock, along with Gummi's and everyone else's in the vicinty, must be slaughtered and burned to prevent contagion. Grief-stricken, he blames his brother and hits the bottle. Gummi though is hiding a secret in his basement that promises to restore relations once and for all.

As the title suggests, these two aged siblings are as stubborn as the livestock they shepherd. They also physically resemble their charges, both sporting ragged beards and hardy woollen jumpers to keep out the valley's bitter winds. It's their gradually thawing relationship that gives Rams its narrative drive but one also finds oneself unexpectedly concerned with the business of tending sheep, a tribute to Hákonarson's confident handling of his subject matter, fascinating in its own right. You entirely believe in the bond these lonely bachelor farmers have with their animals and fully comprehend the horror of what is being asked of them when the extermination order comes.

What little action Rams offers arrives in bursts and is usually instigated by Kiddi's drunkenness: the cantankerous old devil blasting a hole through his brother's bedroom window or blacking out in the snow, an event that forces Gummi to deliver him straight to the doors of A&E in the shovel of his digger. Tonally, Hákonarson's film belongs to the school of deliciously glib understatement we've seen in recent Scandinavian comedies such as Cool and Crazy (2001), Kitchen Stories (2003), Of Horses and Men (2013) and the work of Roy Andersson. While Hákonarson favours documentary naturalism over the stylised artifice of that latter director, he does demonstrate an eye for exceptional everyday beauty amid the overwhelming greyness and remorseless skies of the landscape. A shot of wooden clothes pegs hanging frozen on a washing line lingers long in the memory.

A study of masculinity in isolation and resentment fossilised, Rams is packed with incidental insights and proves finally to be an oddly moving experience. A scene in which Gummi prepares a solo Christmas dinner is typical. This stoic individual's otherwise entirely functional bungalow is suddenly transformed by candles and fairy lights as he seasons a Yuletide joint, carols ringing out on the radio. Touching in itself, this interlude is all the more poignant when you realise this must be the fortieth time he has enacted the same ritual alone, his estranged brother's own lighted window lying a matter of yards away across the darkness. But before matters teeter into outright melancholy, Hákonarson contrives to place a paralytic Kiddi in Gummi's bathtub to sober up - out of which he duly scrambles, naked, wrinkled and still sozzled, only to crash out on the sofa while his host returns to the festive sprouts, entirely nonplussed. Life rarely allows moments of grace to pass unpunished, Hákonarson reminds us with a grin.