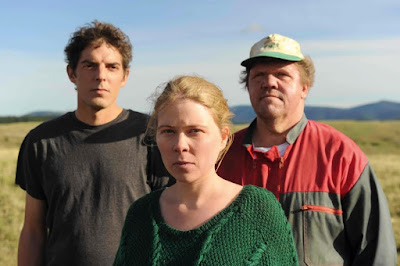 Alain Giraudie made a big splash (pun intended) in the festival and world cinema scene with Stranger By The Lake (2013), which screened at Un Certain Regard in Cannes, while many felt it deserved a slot in the official selection. The film was quite a departure from some of his early work, which is more of a comedic tone, and Giraudie's latest film, Rester Vertical, which is presented in the Official Selection this time, feels closer to his first films in tone and spirit.

In Rester Vertical, Léo (Damien Bonnard) is a film director in serious lack of ideas for his new film, and who goes on a trip in the countryside looking for inspiration, where he meets shepherdess Marie (India Hair). He, somehow, gives her a son, while being embroiled in a love triangle with two other men.

You can't blame Alain Giraudie for resting on his laurels, and relying on the same formula as his most successful film to date. Indeed Rester Vertical feels very autobiographical, mirroring what must have been the director's experience after all the praise for Stranger By The Lake, which was a tough act to follow. If Alain Giraudie was struggling for inspiration, it certainly shows in his new film, which is baffling but for not the right reasons.

Léo as a main character is one who is difficult to warm up to, making a series of increasingly random and bad life choices. There is an existential angst on display, but one that does not seem to yield much results, as he wanders from one bad situation to another one, letting fate decide on his behalf. We never quite understand his motivations, most probably because he does not have any.

The tone is uneven. There is a rather surreal touch to it all but it does not really work. Léo's frequent visits to a female shaman is a case study in that respect, her weird new-age hut looking like the setting for the advert of a middle of the range skincare product.

Stranger by the Lake became infamous for his very graphic scenes, but they felt earned, and were an integral part of the story. There are several of those in Rester Vertical, but here they feel completely gratuitous. Full frontal shots and crude scenes cannot just be added to a film for no reason, there needs to be a consistency with the themes of the film, which here does not exist. They are just there, mildly shocking but mostly dull.

Worst, with a side story involving an older man and his toy boy, Giraudie seems to rehash his "old versus young" theme from his previous film, except that it is a lot less subtle and thought through here. Stranger By The Lake had an interesting, involving older character who felt left out by prettier, younger men surrounding him but never feeling sorry for himself. Here the older man is a bit of an ogre, and his younger lover a selfish, one-note car crash who just takes advantage.

A disappointing follow-up to Stranger By The Lake, Rester Vertical is unlikely to make much of a similar impact. There's hoping that Giraudie's previous film was not a lucky one-off.