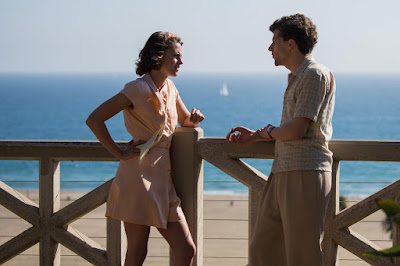 In Café Society, Cannes opening film this year, young New-Yorker Ben (Jesse Eisenberg), unwilling to taker over his father's business, comes to Hollywood at the height of its golden age, to work for his agent uncle Phil. Starting at the bottom of the industry and learning the ropes while mingling with the who's who of the film industry, he falls for Phil's assistant, Vonnie (Kristen Stewart), who is only willing to offer her friendship in return, her heart being already taken.

Period Woody Allen is often him at his most sparkling, with some of his best films such as The Purple Rose of Cairo and Radio Days taking place in the past. But period dramas always run the risk of looking back with rose tinted glasses, a theme that was basically at the heart of Midnight in Paris (another Cannes Film Festival opener, in 2011).


While the trailer for Café Society might have hinted at that kind of unbridled nostalgia for the golden age of Hollywood, those fears are swiftly abated. While the film is absolutely gorgeous and beautifully shot by Vittorio Storaro (Apocalypse Now, One From The Heart), the American director is not fooled by all the glamour, and he does not shy away from the nepotism, ruthlessness and careerism, not to mention the faded dreams of all those who want a piece of the action and are left on the side (there is an hilarious early scene with hapless Bobby hiring a first time escort/wannabe actress, with their encounter going predictably all wrong through bumbling nervousness from both sides).

His beloved New-York of this era is also under scrutiny. The film opens with his usual scenes of a wisecrack Jewish family, one that we have seen many times before in his work, with some killer lines (and there is one of the best, most sardonic punchline in any of his films, one that I will not spoil). Yet the director ensures there is no possible glamourisation of Bobby's mobster brother Ben (Corey Stoll), with the murders he commits shown in an unusual graphic way for Woody Allen, and with a secondary narrative strand that echoes Crimes & Misdemeanors (1989).

This effort to show the "real" side of both cities is at the heart of Café Society, and the film can be seen as a companion piece of Midnight in Paris. In the former, the main character realises that living in the (flawed) present is far better than in a dreamed past. In the latter, dreams and idealised lives collide with the bitter but unavoidable reality. Dreams of making it in Hollywood, dreams of a young, simple love in which reason does not have its place. All the characters have to face reality, and make some pragmatic choices when faced with the world and their future. This gives the film a moving tinge of melancholy. 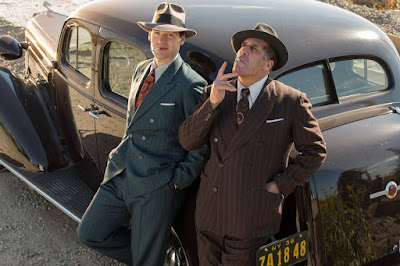 There is a love triangle at the heart of the story, one in which a woman is the driving force, which is refreshing, and there is a touch of Eric Rohmer in the way so many characters are at the crossroads of their love lives, discussing them at length, unable to make some life-changing choices, under the deceptively pretty period facade.

There is no wonder so many actors want to work with Woody Allen, as he so often elicits such great performances and this is no exception. Jesse Eisenberg is exactly how you would imagine a young Woody Allen to be, naive, bumbling and unlucky in love. However the Social Network actor ensures his character is not one-dimensional, and does not force his sympathy on us, far from it.

Steve Carrell, in a secondary but pivotal part, impresses. He could have been a bit one note, acting more as a narrative device than a real character, but he gives him some depth, a man who is truly conflicted and anxious of doing the right thing and being respectful.

The real highlight is Kristen Stewart however. Much has been said about the impeccable way she has conducted her post-Twilight career, and she delivers another great performance, full of maturity and subtlety. She brings just enough old Hollywood pizazz and glamour to make her character believable, yet has a steely determination underneath too, and an inner emotional turmoil that the actress conveys so beautifully.

Official Selection - Out of Competition