Journey To The Shore by Kiyoshi Kurosawa 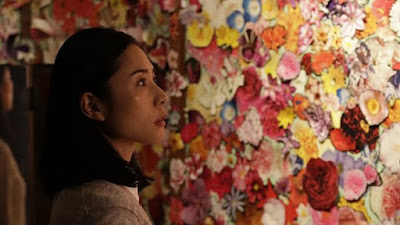 The first words Mizuki says as Yusuke, her long-dead husband, suddenly returns to their marital home one night are “welcome home”. No gasps of fright, no shock; just the resumption of a routine. It’s a reflex, an irrational instinct that speaks volumes about Kiyoshi Kurosawa’s Journey To The Shore. How can we process the loss of a loved one when they’re ripped away from us with no warning or explanation?


Frankly, we can’t. How could we? But in Journey To The Shore, Kurosawa posits a situation in which a woman trapped by her grief can gain some kind of closure, catharsis, by giving her a chance to ask questions, to confirm suspicions, to be angry, to feel something certain, to move on. Her monochrome world, buttoned up, silent and grey, is upturned by her husband’s impossible return, his yellow anorak and red jumper, not exactly bright but certainly noticeable, the first splashes of colour she has seen since his disappearance -- because he didn’t die to her. His body, “eaten by crabs” he tells her, was never found, and so doubt has always been on her mind. He might still be alive.

But that only makes this strange reconciliation, and the journey they take soon after to visit the places Yusuke stayed since his death, even more meaningful to Mizuki. Her life returns. Her clothes are brighter, bolder -- grey a-line skirts become wide-legged, high-waisted royal blue trousers. She laughs, plays. She’s happy. She’s in love. 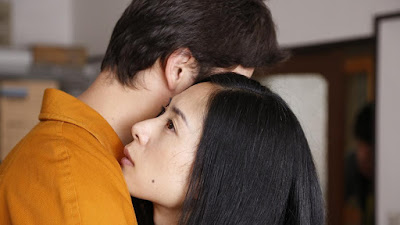 But this love is doomed to burn fast and bright. The two lovers sleep next to each other on single beds pushed together to make doubles in storerooms or back offices, because a real bed in a real bedroom demands permanence. Even the preparation of cakes, a recurring feature of the film, is an exercise in short term pleasure. Cakes are designed for consumption, enjoyment. Cakes taste nice but not for long, and eating too many does more harm than good. You can’t live on a diet of just cake -- but that’s not what they’re for. We eat cake for the joy of eating cake. For Mizuki, any extra time she can spend with her husband is a joy, even if she knows it will end -- but at least this time she has something to say goodbye to.

This sense of optimism shows how Kurosawa’s cinema has morphed into one of second chances, where his ghosts, once malevolent and ashen, are now corporeal and reassuring. The apocalyptic finality of his earlier work has been totally consumed by serenity, and a love of humanity. It’s beautiful. In Pulse, ghosts drag the living into death; but in Journey To The Shore, they’re glad to have been born.

Journey To The Shore is available in the UK on Dual Format, it has been released by Eureka Video in their Masters of Cinema serie