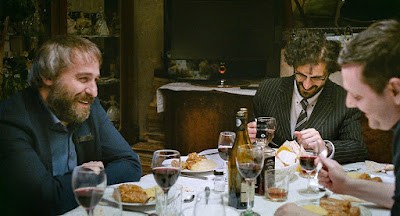 Director Cristi Puiu made an impact on the European arthouse scene ten years ago with The Death of Mr Lazarescu (winning the Un Certain Regard top prize). However some felt that its follow-up, Aurora, was a relative failure. He is back in Cannes this year, having been finally upgraded to the the main competition with Sieranevada. The film is a daunting prospect for your average filmgoer, a near three hours long Romanian film, in which most of the action is set in a flat, and yet, and this is the magic of Cannes, it had the same red carpet treatment with a screening in the main screen today as Jodie Foster's Money Monster starring Julia Roberts, so let it be said that the Cannes Film Festival loves cinema and that's the end of the matter as far as I am concerned.


The film opens with what seems like a fairly uneventful day in the life of a Romanian middle class family, with a married couple bickering about some trivial issues in their car, with the usual lack of communication being to blame. We soon realise however that they are on their way to a gathering to commemorate the death of the head of the family, forty days after he passed away, as per the orthodox tradition. As the guests arrive and the preparations begin, the focus shifts however, as several members of the family turn out to be truthers, discussing conspiracies about 9/11 and the Charlie Hebdo attacks at length, while old resentments comes back to the surface. Romania has had a tumultuous past with communism and dictatorship, and below an appearance of relative material comfort, old disagreements are still raw, with an older relative waxing lyrical about communism and making her radical views about religions abundantly clear. 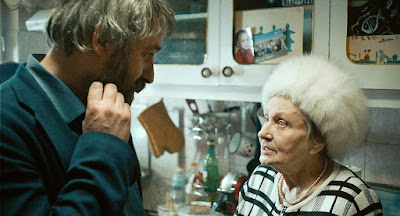 But then the focus shifts back on the family, as lies and (not so) secrets emerge, in the confined space of the flat that acts as a pressure cooker for all the parties involved. Tragic yet somehow darkly comical too, those scenes echo the Italian comedies of the 70's about thunderous family feuds. What weight do such seemingly small issues as unfaithfulness, threats of divorce and bitter disagreements within a family carry in the face of the aforementioned serious issues and History however?

Well, a lot for those involved, and this is the main theme, and as well as the strength of Sieranevada's script. When a tragic event of global reach arise, the usual patronising and morally superior arbiters prowl on social media, going after anybody who dare complain about petty minor inconveniences (the whole "children are starving in Africa" brigade) and accusing everybody of selfish detachment. The film places the audience in the heart of a maelstrom of emotions, because of past and recent events, making the audience realise that they are just as important to those who live them at a human scale, no matter how small and unimportant in the grand scheme of things.

Cristi Puiu's direction is flawless. Keeping the action for most of its running time in the same setting, and skilfully negotiating an ensemble cast with all the interwoven conversations in a Robert Altman kind of way, the Romanian director elicits a certain claustrophobia, and effortlessly switches from deadpan comedy to the most unexpected emotional outpour.

Sieranevada has some sporadic but welcome touches of humour indeed, with a fantastically awkward and increasingly crude argument between an older married couple, as well as a touch of Bunuel, in the way characters seem mostly unable to get to the business of actually eating, with visitors and arguments coming in the way.

Do not be put off by its seemingly austere appearance, Sieranevada is worth the effort, and will ring uncomfortably true for anybody who has ever been true an awkward family reunion.