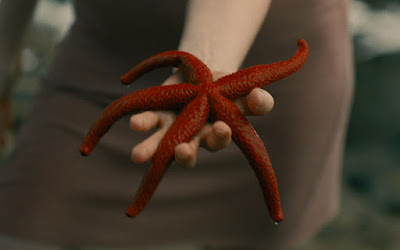 Over a decade on from her debut Innocence (2004), French director Lucile Hadžihalilović returns to our screens with a haunting sophomore work as mysterious as it is exquisite.

Evolution introduces us to a seaside community presided over by a strange, all-female sect. The children they care for are all prepubescent boys who spend their days idling on the isle's volcanic shores and playing in the streets. One day, one of their number, Nicholas (Max Brebant), dives below the waves and returns in a state of shock, claiming to have seen the body of a dead boy staring up at him from the seabed, a red scar slashed across the corpse's belly. Nicholas's mother (Julie-Marie Parmentier) rubbishes the claim and takes him to a local hospital, where he is swiftly operated upon by the facility's sinisterly browless staff. Taken thereafter to a ward populated by other boys who have undergone the same procedure, Nicholas learns to his horror that he is now pregnant and seeks help from Stella (Roxane Duran), a sympathetic nurse.

Unfolding like a fairytale as Nicholas comes to realise that the adults he looks up to cannot be trusted, Evolution could have played as an Iberian variation on The Wicker Man (1973) in less imaginative hands. Hadžihalilović however delivers something much more elusive and complex, drawing on her own childhood memories of alienation in a clinical environment to chilling effect. That's not to say that Evolution is entirely removed from genre, invoking as it does the body horror cinema of David Cronenberg and Andrzej Żuławski, the writings of Margaret Attwood and Angela Carter, and tapping into the same subconscious male fear of pregnancy that Ridley Scott mined so fruitfully in Alien (1979).

The eeriness of the film's apparent plot is simultaneously offset by the sheer beauty of Manuel Dacosse's cinematography. Evolution features frame after frame of effortlessly lovely shots, from the white hillside town juxtaposed against a black beach (filming took place in Lanzarote) to the nightmarish, dank green of the dilapidated hospital. Dacosse's underwater work is even better, capturing the sunshine dancing across the surface from beneath the waves, marine plant life swaying in the current and moonlight laying a path across the bay. The sea is ever-present in Evolution, a character in its own right watching over the actions of Hadžihalilović's characters.

While its imagery is unforgettable, it's the conspiracy at the core of Evolution that really intrigues. Who are the women that comprise this island's gynocracy? Where are the men folk? Have the boys been abducted? Nicholas's drawings of a tower block, a zebra and a Ferris wheel suggest half-recalled memories from a time before his days on the shore - another seems to record the face of his real mother. Are we witnessing the rule of some Sapphic coven, witches worshipping a Lovecraftian deity from the inky depths? A cult of the starfish, perhaps, revering the creature's self-sufficiency and superhuman ability to regenerate and reproduce asexually? A scene in which the town elders are spied upon writhing naked in the sand enacting an occult rite appears to support this line of enquiry but we cannot be sure. Nor can we be certain if their surgical impregnation of the boys is an act of necessity, a holy sacrifice or a sadistic misandrist revenge? Hadžihalilović offers no answers but her phrasing of the questions is irresistible.

Currently out in UK cinemas