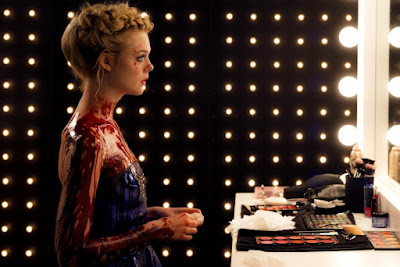 Nicolas Winding Refn had already made a name for himself among the most discerning arthouse crowds with Pusher, Bronson and Valhala Rising, when he crashed into the Croisette on 2011 with his biggest hit to date, neo-noir Drive, which earned him a best director award, a great critical response and catapulted his lead Ryan Gosling into the A-list. Their return to Cannes two years later with Only God Forgives, a more radical and, in my humble opinion, a better film, was not so successful, with some accusing the director of quickly becoming a caricature of himself. He is back this year in competition, with arguably the most anticipated film of the official selection for fans of cult films, The Neon Demon, which he described as a female-centric horror film set in the fashion world of Los Angeles.

In it, naive ingenue Jesse (Elle Fanning) moves to Los Angeles with star in her eyes and dreams of making it big as a model. As she enjoys a meteoric rise, under the watchful eye of make-up artist and confidente Ruby (Jena Malone), she soon has to face to dark side of the city.


The Neon Demon is a rather baffling film after a first viewing, or that was my experience anyway: the weight of anticipation was so immense, and with my screening scheduled late at night after a long day, I came out of it unsure what to make of it, and wanting to see it again almost immediately, which I did the following morning, with much better results. Perhaps Nicolas Winding Refn did not do it any favour by describing it as half Valley of the Dolls (correct), half The Texas Chainsaw Massacre (erm, no).

As usual with him, the visuals are striking, and among the most impressive he has ever achieved. It is no mean feat to make a film set in the fashion industry without it looking like a perfume advert, but the Danish director pulls it off completely. The scenes of photo shoot have a slight surreal touch to them, which works well with a completely mastered use of white, black and gold colours, in contrast with an explosion of pastel and neon colours in the club scenes, creating a wonderfully unique and coherent universe. 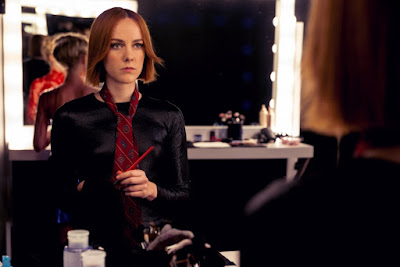 These are not just pretty but empty images already, and I would argue that mid way through the film, the director creates perhaps the best scene of all his career, a radically spared down and ultra stylised fashion show, all in black, red and blue, in which Jesse turns her back to innocence to fully embrace the savagery of this cutthroat world, all achieved through the use of a few lights, shapes and meaningful camera angles.

Yes the rags to riches story before a descent to hell is nothing new, but Nicolas Winding Refn makes it completely its own, giving it an unsuspecting depth and sadness, in large part due to Elle Fanning's wonderful performance. Her character's mixture of innocence, naivety and frailty as well as a rising ambition and ruthlessness are perfectly conveyed. The biggest surprise however is Jena Malone, an actress who has kept growing in confidence and screen presence since her breakthrough performance in Donnie Darko. An ambivalent character with who takes Jesse under her wings with questionable motives, her sad, complex narrative arch makes her the heart of the story, and Jena Malone gives a surprisingly moving and an understated performance (although the director feels the need to give her a rather gratuitously shocking scene, which is a shame).

Men are just relegated in the background, playing either the left behind boy-friend, the scuzzy fashion photographer or total scumbag (Keanu Reeves, having fun in a few scenes).

As for the soundtrack by Winding Refn's regular composer, Cliff Martinez, it is the perfect match for the beauty and sadness of the film, all in electronic melancholy.

Although at times I almost wish Nicolas Winding Refn had gone with an even more radical approach, with fewer dialogues, The Neon Demon stands among his best films.