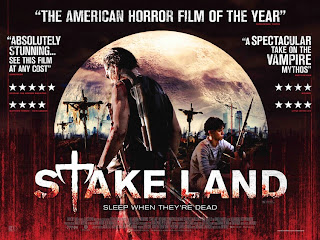 Yes Stake land, not skate land, not steak land, stake land, as in vampire killed with a stake. Stake Land is a new indie horror directed by Jim Mickle, who did a very low budget film previously called Mulburry St before, about half men/half rats creature under the sewers in New York (presumable after the alligators of the 80's urban myths had vacated the place). It is coming out in the UK today.


Stake land impresses with its visual mastery, its relentlessy grim atmosphere and its refusal to conform to modern horror conventions, such as a frenetic editing, jarring CGI and cheap jump scares.

Stake land is an end of the civilisation brought by vampires apocalyptic movie, which is rather rare as it is usually zombies who are the culprits. I have written a full review of it on the film site Director's notes, hence the shorter post.