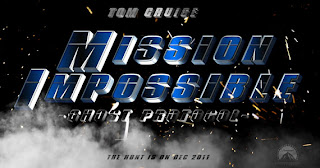 I am not entirely sure if the Mission Impossible - Ghost Protocol first trailer was supposed to be released so early, but since a French dubbed version was leaked online a few days ago, it was probably deemed less damaging to release the genuine article now, even it we are still a good six months away from its release. The fourth outing of the popular franchise is the first live action film directed by John Bird, who directed such animated masterpieces as The Incredibles (2004) and Ratatouille (2007) for Pixar, as well as cult classic The Iron Giant (1999). So what is this first trailer telling us?


Let's backtrack a little bit. The Mission Impossible franchise should have benefited from the inspired decision of hiring a new director for each film, each allegedly bringing its own different style and spin to it. And while the first one, directed by Brian de Palma was a true masterpiece, wearing the unmissable mark of its director, each subsequent sequel was a let down. John Woo attempted to inject some romance and old school glamour but suffered from a terribly dull script. And JJ Abrams managed a competent but ultimately empty threequel, and devoid of any personality. Arguably, those two directors had to contend with Tom Cruise and his reputation as a control freak.


The first thing that the trailer is telling us is that Paramount has not backed down with the release date, and will send it battling it up head to head with the Sherlock Holmes sequel. This is a mistake. While it would have seemed inconceivable a few years back that Robert Downey Junior could ever be a threat to Tom Cruise at the box office, the situation has changed.

The Guy Ritchie directed first film was an unexpected smash hit, and is a much more family friendly film which suits its pre-Christmas release date. Whereas Mission Impossible 3 has underperformed at the box office, and Tom Cruise star power is not what it once was. It runs the risk of being bruised on its opening week end and never recovering from it. An April release date would have been much more suitable.


So on to the trailer itself. First impressions are really good. It looks a lot closer to the original and best first film (with at least one direct reference to it), with its blend of glossy sophistication and globe trotting high octane action, and especially the storyline, which sees Ethan Hunt and its team going rogue once again to fight a higher (and so far unseen) evil.

Tom Cruise was supposed to take a back seat on this one, and pass on the franchise to Jeremy Renner (who is on fire since its Oscar's nominated turn in The Hurt Locker) but you would not know it looking at this trailer. And yet it does make sense: Jeremy Renner is still fairly unknown to the general audience, despite landing the lead in the upcoming Bourne reboot and an important part in The Avengers (2012). A few short scenes in here introduce him as an enigmatic character, which suits his more subtle acting style.


The laughably bad and out of place Eminem song was probably imposed by the studio in a bid to woo a far reaching audience, and will hopefully not even feature in the final product. We see a little of his new team. Josh Duhamel (from Lost) is barely glimpsed. Paula Patton (Precious) will undoubtfully bring some class to the proceedings, as with her previous performances, and Simon Pegg seems to have a bigger part than in the previous film (which is likely to feed his ever-growing ego).

A highlight of the film is set to be the Ethan Hunt's climb of the highest tower in the world, the Burj Al Khalifa Tower in Dubai, a scene which was shot in IMAX. The one question I have however is whether Brad Bird has been allowed to infuse this with his personality, and especially his absolutely brilliant sense of humour, made obvious in his contribution to early episodes of The Simpsons, and The Incredibles. Or has he been crushed like others before him in the franchise by the Tom Cruise juggernaut?