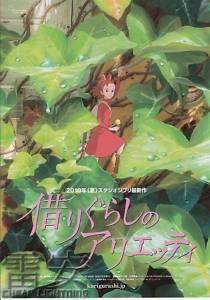 What a pleasant surprise Arrietty turned out to be. I had not been completely won over by the Ghibli studio's previous film, Ponyo. Not that there was anything necessarily wrong with it, I just did not engage that much with the story and the characters. This latest, based on the children's book The Borrowers by Mary Norton, tells the story of a family of "borrowers", tiny people who live in little houses under the floorboards of human houses, borrowing what they need at night. Their little girl Arrietty has just turned fourteen and is being taught to borrow and to look after herself. Yet their fragile way of life is threatened when a sick and well meaning young child comes and live in the house and discovers them.


I had read some slightly negative reviews prior to watching it, complaining that the film lacked the quirkiness of the previous films from the Japanese studios, such as Spirited Away and Princess Mononoke, and was smaller in scale and ambition, which I find to be some very unfair accusations. 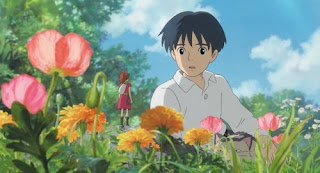 Yes the story is entirely set in a country house, its garden, and in the small house of the borrowers. Yet, as usual with the Ghibli studios, the drawing is absolutely gorgeous, and the attention to details incredible, painstakingly recreating the colours and atmosphere of a summer in the country, with flowers in bloom, thunderstorms and water drops on leaves. And yes there might not be the kind of quirky creatures we have been accustomed too, yet there is still a grumpy yet loveable fat cat that more than makes up for it.

Others have complained that the studio chose to adapt a British book rather than tackling some Japanese fairy tale. Yet I did find it gives it an unmissable Japanese twist. While I was worried this would verge on the sentimental (especially with the arrival of a sick young child!), it never gets close. Yes it is really sweet and likeable but also surprisingly slight and subtle for a kid's movie, never forcing any emotion down our throat. 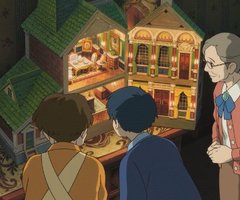 But then of course, Ghibli studios animated films have never been made solely for children, they can be appreciated by an adult audience without the need for ghastly pop culture references (like what you find in 99% of Western animation these days). If anything, it feels more grown up than some of their recent films, with a bittersweet and melancholic tone.

I kept being reminded of the Japanese term  "Mono no aware" which means an empathy towards things, and also an appreciation of the ephemera, with the slower pace, the way the film takes the time to celebrate the nature that surrounds them, and with some plot developments which I will not spoil. I have to admit to nearly shedding a tear at the end, and no this is not spoiling it, as the ending is not an unhappy one in any ways, more of a melancholic one. 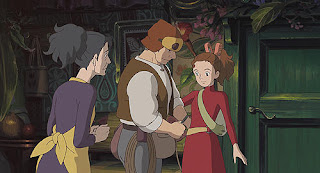 I left with a warm and fuzzy feeling deep inside, as if I had spent a lazy and sunny summer afternoon dozing off in a field with a gentle breeze. This the first film directed by Ghibli's animator Hiromasa Yonebayashi and is all the more impressive for it, I cannot wait to see in which direction he is going to take the venerable animation studio. Arrietty is out in July in the UK and early next year in the US.