Rise of the Planet of the Apes: from chimpan-A to chimpazee 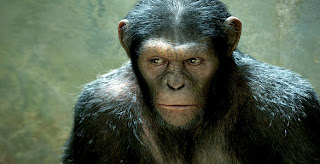 After the completely misguided Tim Burton's remake from ten years ago, a new visit to the planet of the apes seemed as relevant as a Donkey Kong film adaptation. Yet Fox had other ideas and decided to greenlight a new project, as a true franchise never dies these days. However, having read the synopsis and seen the first two trailers, it looks a lot darker and more exciting than anticipated.


Most people remember the cuddlier tv serie of the 70's, yet seem to forget how dark and disturbing the films actually where. I am not so much talking about the twist at the end of the first one, (it was Earth all along!) but what followed.


I have not seen it for decades but I do remember being completely traumatised by the sequel, Beneath the planet of the apes, as a child. The storyline took a frankly bizarre turn with this second movie, featuring a cult of intelligent but mutated humans, hideously deformed due to atomic radiation exposure, living under the surface of the planet and worshipping the atom or something. (Gamers will find some similarities with Fallout 3!) I also remember (spoilers) the terribly bleak ending where all the main characters got killed off before the planet got blown up by an atomic bomb. This is how pre-Star Wars sci fi was, depressing, coldly intellectual... 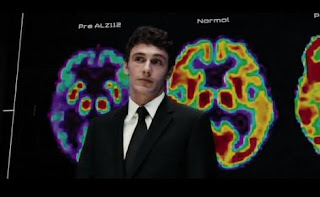 In this new incarnation, Fox had the brilliant idea to show us what we had all been clamouring for: how the apes got to become smart and take over humans as the leading specie. While this had been covered by the last two films of the franchise in the 70's, it was just not convincing enough, with neither the right tone nor budget to pull it off. And I have to admit I am a big fan of doomsday movies, the crazier the better. Especially since most post-apocalyptic films never quite deliver the money shot, only showing too short flashbacks of how it all kicked off.

This trailer surely shows a darker tone than the remake, especially since we all know too well what is about to happen. Within these short few minutes, there is a perfectly distilled sense of empending doom, and what might have looked ridiculous (an army of monkeys taking over the world, yeah right!) is actually pretty chilling and convincing. The CGI is a little bit dodgy in parts but I assume (I hope!) they are still working on it as we speak.


And to top it up there is the intriguing pairing of James Franco and Freida Pinto. James Franco follows up his part as the least popular Oscar host ever with the part of a scientist responsible for the end of the human specie (can you see a pattern there? What's next, a kitten killer?). As for Freida Pinto, she is negociating her post Slumdog millioanaire with a lot more flair than poor boy-friend Dev Patel. After fliriting with art-house (Miral, You will meet a tall dark stranger), she is now embracing blockbusters with this followed by The Immortals later in the year.

Sadly I have been looking for a clip of the hilarious Planet of the apes musical in the Simpsons, to which the title of the post refers to, but I cannot find it in English... So I have to end this with a picture instead! 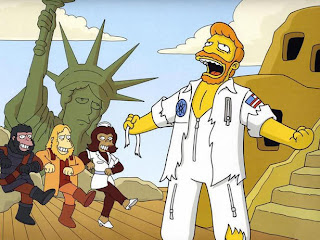