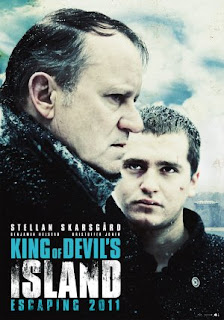 A Norwegian film, Trollhunter, was the talk of the Edinburgh film festival, yet it was unfortunately shown a day after I left, so I will have to wait for its UK September release. I settled for another Norwegian film called The King Of Devil Island, thanks to its intriguing title and its premise, which is based on a true story: on the island of Bastoy, in the early 20th century, a group of young male delinquents were kept under a cruel regime of mental and physical abuse in a correctional facility, and used as cheap labour under the excuse of rehabilitation. The arrival of two new inmates threatens the fragile balance of power between offenders and guards.

I really wanted to like this. The film is absolutely gorgeous to look at, from start to finish, with hauntingly beautiful snowy and desolated landscapes, and a colour palette that ranges from depressing grey to icy cold blue, with a suitably melancholics score to match the atmosphere. Each carefully planned shot really shows a director completely in control of his art direction, making full use of the stunning and barren locations. 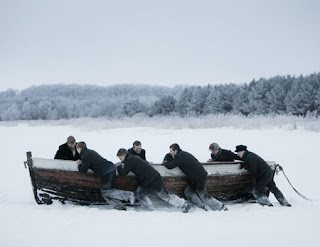 It is then a real shame that director Marius Holst does not display quite the same skills when it comes to the dramatic development. In fact, and without sounding too harsh, I often felt that the film was actually rather clumsy, not always knowing where it was going, and taking far too long to get there. In the second half, I almost found myself wanting to shout at the screen when the actions of some of the protagonists made no sense. And when the film finally reaches its climatic and cathartic conclusion, it feels like too little too late.

In a way, it reminded me of that time in a restaurant at the top of a hotel in Goteborg overlooking the city, on a rainy June day of an otherwise sunny week, eating a full plate of cold shrimps with mayo. With the picturesque setting and melancholic atmosphere, I was waiting for something to happen that never quite did.

There is a better film trying to get out of the clumsiness, and there is an important issue being tackled, mainly the idealism of youth against the moral compromises of grown ups. But I really struggled to actually care for some rather badly defined characters. 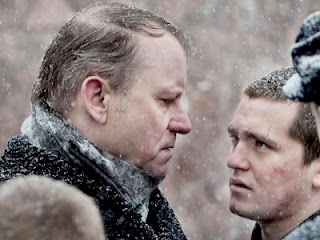 The acting is decent, especially from Stellan Skarsgard, on a break from blockbusting duties, and newcomer and leading man Benjamin Helstad, but not so convincing with some of the supporting cast. If the Norwegian director manages to capitalise on his undeniable visual skills, and improve on his storytelling, he will certainly be a director to follow.